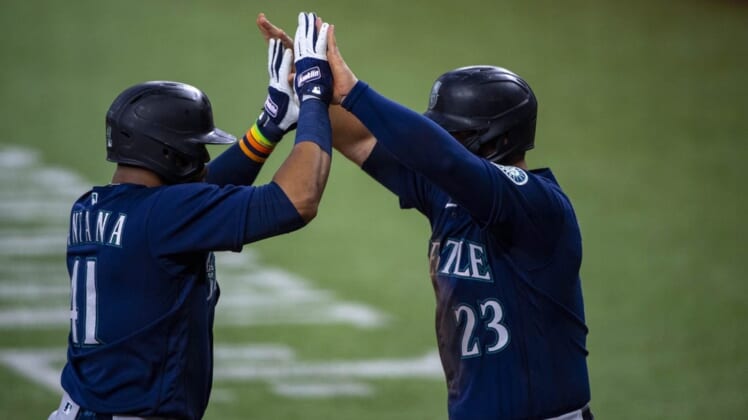 J.P. Crawford delivered an RBI single in the 10th inning to help the visiting Seattle Mariners win their 13th straight game, 3-2 against the Texas Rangers on Saturday afternoon.

The Mariners are two victories shy of matching their longest winning streak in franchise history, set in the 2001 season.

Carlos Santana slammed a two-run homer, Ty France had three hits, and Crawford and Adam Frazier delivered two hits each for the Mariners.

Seattle starter Logan Gilbert allowed one run and four hits in five innings. He struck out four and didn’t walk a batter on 85 pitches.

Diego Castillo (7-1) pitched the ninth for Seattle, and Matthew Festa threw a scoreless 10th for his first career save.

Corey Seager had two hits for the Rangers.

Sam Haggerty was on second base to start the 10th inning off Brett Martin (0-5). He stole third and came home on Crawford’s ground ball single down the first-base line for a 3-2 lead.

Erik Swanson gave up a leadoff double to Leody Taveras in the seventh. Swanson got the next two outs, but No. 9 hitter Elier Hernandez came through with a line-drive single up the middle to score Taveras and tie the score 2-2.

The Rangers took a 1-0 lead in the second when Nathaniel Lowe doubled to lead off the inning and came home on a one-out single by Jonah Heim.

The Mariners stranded (12) runners, including the bases loaded twice in the first four innings.

Howard retired five in a row before giving up a one-out single to France in the third. After a balk, Santana came through with a two-out two-run homer to deep right-center field to move the Mariners ahead 2-1.

Crawford, who missed the previous two games with a bruised right index finger, doubled to lead off the sixth. Howard was removed after walking the next batter.

Matt Bush entered and retired the next three hitters, the final on an over-the-shoulder running catch by Adolis Garcia in right field to strand both runners.