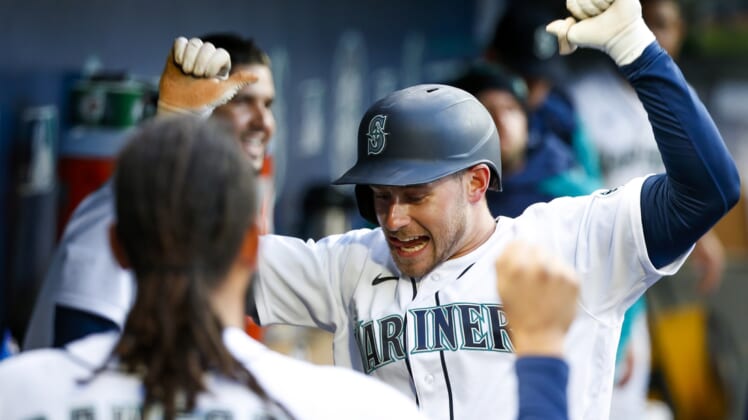 Eugenio Suarez hit a three-run homer in the first inning, and that was enough for Robbie Ray as the Seattle Mariners defeated the visiting Texas Rangers 6-2 on Tuesday night.

Jarred Kelenic added a solo shot off the right field foul pole in the second, giving Seattle a 4-0 lead. Abraham Toro hit a two-run homer in the seventh to cap the scoring and give the Mariners victories in four of their past five games.

Ray (2-1), last season’s American League Cy Young Award winner while with the Toronto Blue Jays before signing with Seattle as a free agent, went six innings and allowed two runs on four hits. The left-hander walked one and struck out four.

Texas right-hander Jon Gray (0-1), making his first start since Opening Day because of a stint on the injured list with a blister on his right middle finger, gave up just three hits over five innings, but two of those were homers. Gray yielded four runs, walked one and fanned four.

Gray struggled with his command early.

After striking out Seattle leadoff hitter Adam Frazier in the first, he hit Ty France with a pitch and walked Jesse Winker, setting the stage for Suarez, who belted an 0-2 slider out to center field.

Following Kelenic’s second-inning homer, the Rangers got a run back in the third. Eli White led off with a double to center, stole third and scored on Marcus Semien’s sacrifice fly to left.

White and Semien combined for another run in the fifth. White drew a two-out walk and Semien lined an RBI double to left to make it 4-2.

The score stayed that way until the seventh. Rookie Julio Rodriguez led off the bottom of the inning by grounding a single to left off Rangers reliever Spencer Patton. Rodriguez stole second, moved to third on Kelenic’s groundout to the right side of the infield and scored on Toro’s homer to right-center on an 0-2 pitch.

The Rangers have lost four consecutive games and six of their past seven.