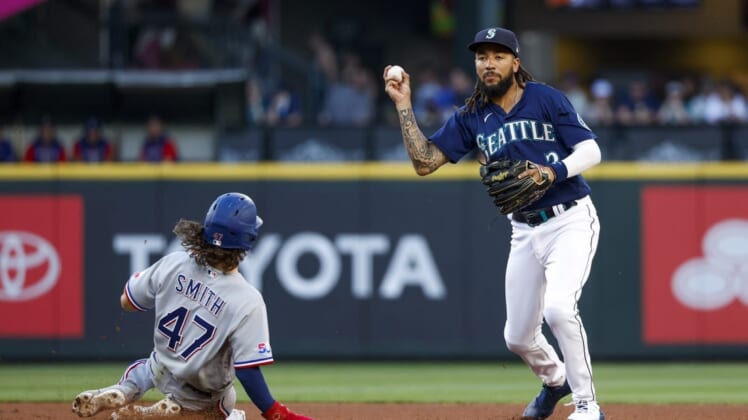 Adolis Garcia and Nathaniel Lowe homered for the Rangers.

Flexen (7-8) got the Mariners back on track by winning his fifth consecutive decision. The right-hander allowed two runs on four hits, with two walks and five strikeouts.

Trailing 4-2, the Rangers rallied in the ninth. Lowe hit a leadoff homer off Diego Castillo before Leody Tavares grounded a single into right and Kole Calhoun walked on four straight pitches.

Castillo struck out Ezequiel Duran before giving way to fellow right-hander Erik Swanson, who got Josh Smith to foul out and Marcus Semien to ground out for his second save.

Texas right-hander Glenn Otto (4-7) took the loss. He allowed three runs on seven hits in 5 1/3 innings. He walked one and fanned five.

The Rangers opened the scoring in the third on a wild pitch by Flexen after singles by Duran and Smith and a fielder’s choice.

The Mariners took the lead in the fourth. France led off with a single off the glove of first baseman Lowe. With one out, Eugenio Suarez grounded a single into right field, with France taking third on the play.

Cal Raleigh followed with a run-scoring single to right. Adam Frazier lined a single to right to load the bases and after Abraham Toro flied out for the second out, Otto threw a wild pitch to score Suarez.

With two outs in the fifth, France hammered a 1-2 pitch over the wall in straightaway center field to make it 3-1.

The Rangers got a run back in the sixth as Garcia hit the first pitch of the inning over the right-field fence.

The Mariners tacked on some insurance in the seventh. Sam Haggerty singled with one out and J.P. Crawford walked before France was hit by a pitch to load the bases. Carlos Santana then beat out a potential double-play grounder to score Haggerty.