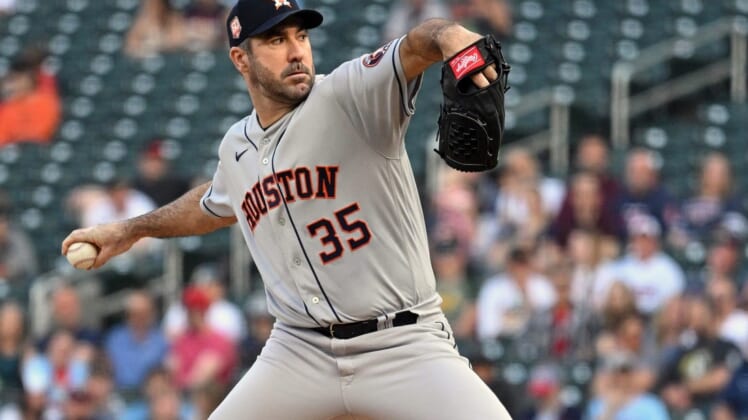 This was the season the Houston Astros were expected to take a step back following the departure of another star, Carlos Correa, in free agency.

And this was the season the Seattle Mariners, after signing the American League’s reigning Cy Young Award winner, Robbie Ray, supposedly were going to snap their 20-year playoff drought, the longest in the four major professional sports.

But the Astros arrived in Seattle for a three-game series starting Friday night in their familiar spot atop the AL West while the Mariners are 11 games back in the division cellar.

The Mariners’ 4-2 loss to visiting Oakland on Wednesday afternoon was their eighth in the past 10 games.

“You are what your record says you are,” said Mariners manager Scott Servais, whose club is 18-27. “I believe we’re a better ballclub than that. We’re capable of playing a lot better and we will. It’s just not happening right now.

“We’re not playing good baseball. We know that. We have to make some adjustments here and it needs to happen quick. We’re going through some painful times right now, there’s no question about it.”

The Mariners are 7-21 over the past month.

“No one likes to lose, especially the way we are right now and especially games I think we should be winning,” shortstop J.P. Crawford said. “It’s frustrating. But we have more than 100 games to go, so we’ve got a bunch of time and we can’t press right now.”

In addition to losing George Springer and Correa over the past two offseasons, the Astros had some question marks in their starting rotation. Justin Verlander, the 39-year-old right-hander, was coming off Tommy John surgery and veteran Zack Greinke returned to Kansas City.

But the Astros’ pitching has been stellar, with an AL-leading 2.81 team ERA.

He hasn’t been scored upon in his past three starts, including in six innings Saturday against the visiting Texas Rangers. He scattered six hits and struck out eight without walking a batter in the 2-1 win.

“I wasn’t locked in the whole game, but found some pitches when I needed to,” Verlander said.

That Verlander is pitching at all, much less to the level that has earned him a pair of Cy Young Awards, is an accomplishment.

“He really worked to get to this point,” Astros manager Dusty Baker said. “He’s unlike almost any other player I’ve ever had.”

Verlander has had almost a season’s worth of appearances against Seattle, facing them 33 times previously. He’s 18-9 with a 3.11 ERA against them.

After having Thursday off to regroup, the Mariners will counter with right-hander Chris Flexen (1-6, 4.98). Flexen has allowed 14 earned runs over his past three starts after getting limited run support earlier in the season. He’s 0-5 with a 6.16 ERA in six career starts against Houston.