Mariners aim to fix the defense, Royals the offense as teams meet 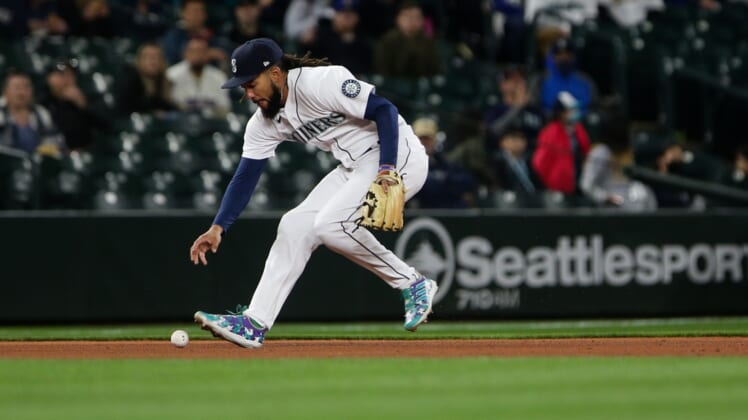 Shortly after it was announced that Kristopher Negron would serve as the Seattle Mariners’ acting manager Wednesday with Scott Servais quarantined with COVID-19, shortstop J.P. Crawford couldn’t help but needle his former teammate.

Well, the Mariners likely will be taking extra fielding practice before Friday’s opener of a three-game home series with the Kansas City Royals at T-Mobile Park.

The Mariners committed three errors and gave up four unearned runs in an 8-6 loss to visiting Texas on Thursday, spoiling Seattle’s chance for a three-game sweep.

Crawford, who hit a three-run homer in the first inning to give Seattle a 5-0 lead, made two fifth-inning errors — one throwing and one fielding — as the Rangers took the lead.

“I messed them up,” said Crawford, a Gold Glove winner in 2020. “We should’ve won today. Yeah, that game is on me. No one likes making errors. I should’ve made the plays.”

Mariners left-hander Marco Gonzales, who only allowed two earned runs, refused to blame his teammates, however.

“I look at that as an opportunity to pick our guys up,” Gonzales said. “Certainly, these guys pick me up all year long. It’s a long season to be played and there’s gonna be a lot of that back and forth. But in those times, I take pride in being able to move forward and get us back in the dugout. Unfortunately, I wasn’t able to do that. So I put that on myself to be able to continue to make pitches and unfortunately I couldn’t make that happen.”

The Royals have yet to commit an error this season. They had a chance to complete a three-game sweep Thursday but lost 1-0 to visiting Minnesota.

The Royals rank 29th in the majors in offense and have scored just 31 runs.

Nicky Lopez, who entered Thursday’s game batting .367, even tried unsuccessfully to bunt for a base hit in the ninth inning.

“Everyone knew I was probably going to bunt there,” he said. “That’s what I do; I just popped it up. More times than not, I’m not popping it up.

“Sometimes, it’s baseball, man, it gets away from you.”

Royals right-hander Brad Keller (0-1, 1.38 ERA) is scheduled to start the series opener. Keller is 0-2 with a 5.00 ERA in four career appearances against Seattle, including three starts.

The Mariners plan to counter with right-hander Chris Flexen (0-2, 5.23). Flexen won his only previous start against Kansas City, allowing one run on six hits in 5 2/3 innings last Sept. 17.