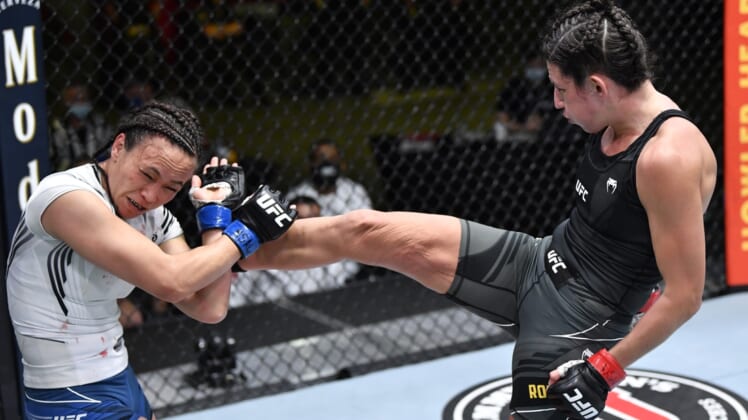 Brazil’s Marina Rodriguez emerged with a unanimous-decision victory over the United States’ Michelle Waterson in a flyweight fight that served as the main event of a UFC Fight Night card Saturday in Las Vegas.

“It was a five-round fight against the tough opponent, so for sure I was going to get banged up a little,” Rodriguez said through a translator. “Just a week’s rest and I’ll be fine.”

Waterson (18-9-0) produced the only takedown of the match, in the fourth round, despite making five takedown attempts.

Rodriguez said, “She’s so experienced. That’s a thing I knew going into it. … I knew she was very tough, so to go five rounds with her and win, it’s an amazing feat for me in my career.”

Regarding the fourth round, Rodriguez said, “She was able to take me down and control me pretty well. I was able to at least avoid a lot of damage, and that was the main thing, make sure that I at least (get through it) because it’s five rounds.”

In the co-main event, last-minute replacement Alex Morono stopped Donald Cerrone with punches at 4:40 of the first round in a welterweight bout. Morono (19-7-0) landed multiple right hands to the head while mixing in a few body blows, and the referee eventually stepped in with Cerrone backed against the fence.

Cerrone (36-16-0) had been scheduled to oppose Diego Sanchez, but the UFC severed ties with Sanchez in late April following questions regarding the 39-year-old’s medical history. Morono agreed to step for Sanchez to oppose Cerrone on the Saturday card.