Marina Alex emerges from pack to win at Palos Verdes 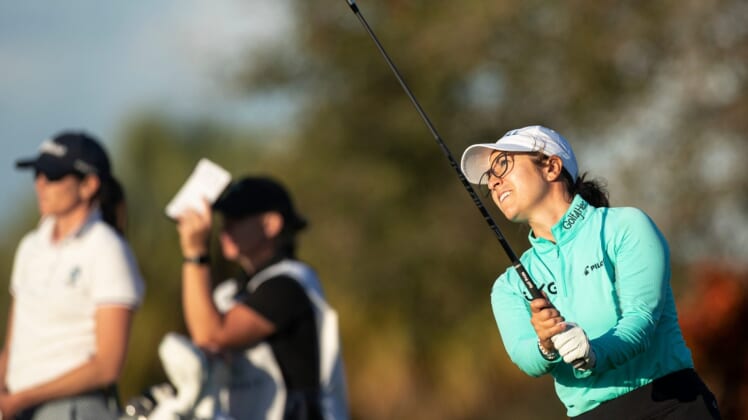 Marina Alex rang up six birdies and saved par at the 18th hole to shoot a 5-under-par 66 and earn her second career LPGA Tour title Sunday at the Palos Verdes Championship in Palos Verdes Estates, Calif.

Alex finished with a 10-under 274, beating world No. 1 Jin Young Ko of South Korea by a stroke.

The 31-year-old New Jersey native fought through both an injury and COVID-19 during 2020 and said it was a struggle getting back to peak form.

“I wasn’t sure if this would ever happen again, if I’m being perfectly honest,” said Alex, who last won at the 2018 Cambia Portland Classic. “It’s been tough. We’re all getting older. I’m getting older.

“There’s so many amazing players out here — the competition is really, really difficult — so I just didn’t know if my mind and my body were going to put me back in the position that I was going to be able to do it again.”

Alex began the day three shots off the pace and had a bogey at No. 3 before starting her push, rolling in three birdies between the fifth and eighth holes at Palos Verdes Golf Club.

She kept climbing, tying the lead at 8 under and 9 under with back-to-back birdies at the par-3 11th and par-4 12th. Her final birdie of the day, a short putt at the par-5 16th, gave her sole possession of the lead with Jin Young Ko already done for the day.

Alex two-putted for par at the par-4 18th to stay in front. New Zealand’s Lydia Ko and Australia’s Hannah Green, playing in the final pairing, were unable to catch up, though Lydia Ko’s approach at the 18th came up several feet shy of an eagle 2 that would have tied her for the lead.

Alex said she did her best not to watch the leaderboard.

“I think it just adds anxiety for me, knowing if I’m near the lead or in the lead,” Alex said. “It can create extra pressure that I don’t need whether it’s to make a birdie or to conserve a lead, it doesn’t really help my performance.”

Jin Young Ko posted an eagle, four birdies and one bogey earlier in the day for a 66.