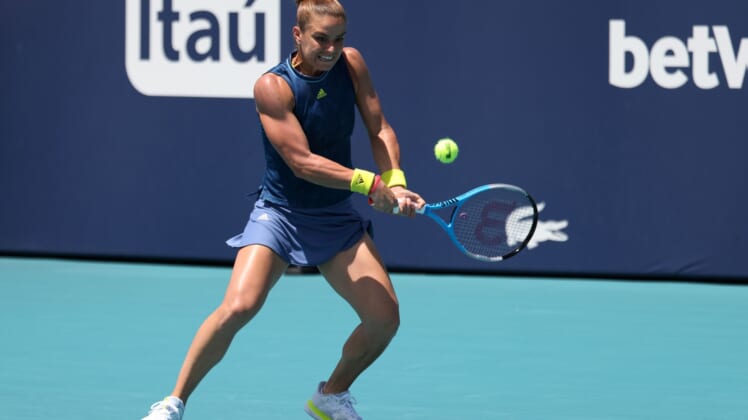 Naomi Osaka’s 23-match winning streak reached an end Wednesday when Maria Sakkari put on a dominating display with a 6-0, 6-4 victory in their quarterfinal matchup at the Miami Open.

Sakkari, seeded 23rd at the event, smacked 22 winners compared to only five for the second-seeded Osaka and completed the upset in just 69 minutes.

The Greek, ranked 25th in the world, said she and coach Tom Hill devised a game plan specifically for dealing with Osaka’s skills.

“I don’t think tennis-wise it was like the best tennis I have ever played in my life,” Sakkari said afterward. “I think I executed our strategy with Tom really well. I just did what I had to do. I’m not gonna tell you what we discussed before the match, I just did it most of the match, except maybe a couple of games where things didn’t go right.”

Sakkari will face either eighth-seeded Bianca Andreescu of Canada or Spain’s Sara Sorribes Tormo in Thursday’s semifinals. Those two were slated to meet in the quarterfinals on Wednesday night.

The loss was the first for the second-ranked Osaka in more than 13 months, since Sorribes Tormo posted a 6-0, 6-3 win over her in the Billie Jean Cup qualifiers.

Osaka, from Japan, had 23 unforced errors and four double faults on a day in which she never found her rhythm.

“She’s a really big fighter so I knew it wasn’t going to be easy,” Osaka said of Sakkari. “I felt like I haven’t been playing well this whole tournament. I couldn’t find a groove, so mentally it’s really hard for me to play against really high-quality players with what I feel is low-quality tennis.”

The setback also eliminated any chance of Osaka taking over the No. 1 ranking from Australia’s Ashleigh Barty, who has advanced to the semifinals.

Sakkari committed 22 unforced errors and but had a far better first-serve percentage of 69 compared to Osaka’s 40.6.