Maria Sakkari, Bianca Andreescu advance to U.S. Open round of 16

No. 17 seed Maria Sakkari of Greece recorded nine aces while posting a 6-4, 6-3 upset victory over 10th-seeded Petra Kvitova on Saturday in New York to reach the round of 16 at the U.S. Open.

Perhaps most impressive was the fact that the 26-year-old Sakkari never lost her serve during the 82-minute match.

“I think it was a great match,” Sakkari said. “It’s always tough to play against Petra, because she hits very hard, probably the hardest on the tour. She’s lefty, so it makes your life even tougher.

“I was prepared that I’m gonna have to hit out of her rockets, but I’m very pleased with the way I served, the way I returned, and my attitude on court once again.”

Andreescu had 21 winners against 11 unforced errors in the 68-minute match to improve to 10-0 in main-draw matches at the U.S. Open. Minnen had 17 winners and 22 unforced errors.

Andreescu said she is looking forward to battling Sakkari. The two met in the Miami Open semifinals five months ago with Andreescu prevailing 7-6 (7), 3-6, 7-6 (4).

“She’s very powerful, she serves very well, she moves well, she’s a fighter,” Andreescu said of Sakkari. “But I’m also all those things, so it’s going to be good. I’m pumped.” 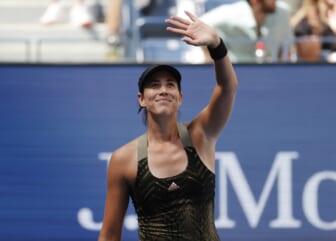 Raducanu had a 23-5 edge in winners in the 72-minute match. She committed 16 errors while Sorribes Tormo had 11.

“I went out there with nothing to lose, and just knew that if I was going to win or have a shot of winning that I was going to have to dominate and hit the corners as many times as possible and not miss,” Raducanu said.

Raducanu, who also won three matches at Wimbledon, will next face the winner of Saturday’s match between top-seeded Aussie Ashleigh Barty and American Shelby Rogers.

Bencic next faces seventh-seeded Iga Swiatek of Poland. Swiatek had 32 winners against 27 unforced errors during a 6-3, 4-6, 6-3 triumph over No. 28 Anett Kontaveit of Estonia.

Kontaveit had 37 winners against 35 unforced errors. Both players had six aces.