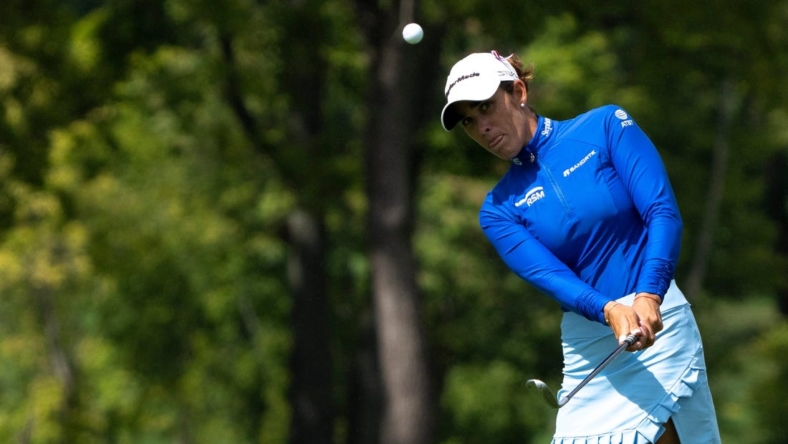 Maria Fassi of Mexico recorded an eagle and six birdies to shoot a career-best, 8-under 62 and charge into the lead at the Pelican Women’s Championship on Friday, in Belleair, Fla.

The tournament was shortened from 72 to 54 holes after Tropical Storm Nicole forced Pelican Golf Club to stay closed Thursday.

Fassi kept a clean card and set up an easy eagle putt for herself at the par-5 14th hole.

“We actually took my 5-wood out of the bag for today and kept the hybrid,” Fassi said. “We didn’t think I was going to use the 5-wood, and that (second shot) was the perfect number for a 5-wood.

“So I was like, OK, this is interesting. I was just thinking we were barely going to get to the front edge, maybe even five yards short. I got a little bit of wind helping and hit a perfect hybrid just nice and high. It maybe pitched like five, six yards on the green and went to like 10 feet straight up the hill. Honestly I couldn’t have left myself a better putt for eagle, and it was good to just finish it with a good putt.”

The Pelican is the penultimate tournament of the season and the final chance for players to qualify for the CME Group Tour Championship next week. The top 60 players in the season standings will qualify.

Fassi ranks No. 72 in the Race to the CME Globe standings entering the week.

“For me, it was a very tough season at the beginning and kind of got back on my feet towards middle, end of the season,” Fassi said. “So now that I have a chance, and especially after today’s round, it’s just keep doing what I’ve been doing today.

“I would definitely love to finish the year there, but — it’s one of our goals for sure, but I think if I just keep taking care of myself and hitting good golf shots that it’s just going to take care of itself at the end.”

Thompson’s round featured five birdies, one bogey and an eagle at the par-5 seventh hole.

“I hit a good drive,” Thompson said of the eagle. “It’s a tough driving hole, and then I had about 215 to the pin and a little down, left-to-right wind, and I hit a 2-iron to about 30 feet and kind of lipped it in. Didn’t know if it was going to lip out or not, but got lucky and it went in.”

Thompson is searching for her first win on tour since June 2019.

Defending champion Nelly Korda was part of a tie for 13th at 4-under 66. World No. 2 Jin Young Ko of South Korea opened with a 1-under 69.