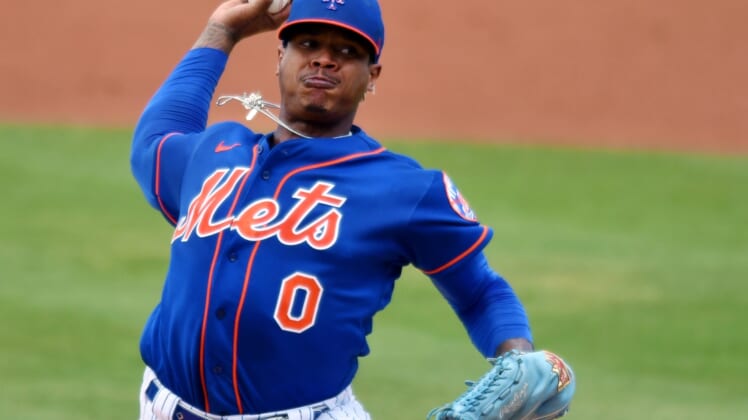 Marcus Stroman’s first full season with the New York Mets is going to begin a year later than expected and for an organization in far different shape than when he arrived. But Stroman will take the mound Tuesday night with the task of keeping the Mets from lapsing into a familiar rut.

The Mets will look to bounce back from a disappointing season-opening loss Tuesday night, when they are scheduled to visit the unbeaten Philadelphia Phillies in the middle game of a three-game series between the National League East rivals.

A new era for the Mets began in old-fashioned style Monday night, when Jacob deGrom exited after six scoreless innings but didn’t get the win when the Phillies scored five times in the eighth to earn a 5-3 win.

deGrom was clocked regularly at 100 mph in allowing three hits and two walks while striking out seven. He also went 2-for-3 with an RBI single. But the two-way performance went for naught as Trevor May and Aaron Loup squandered the lead in the eighth — the 31st time in deGrom’s career the Mets’ bullpen gave up a lead after he left in line for the win.

“Jake shouldn’t have to do everything himself,” May said. “That’s not what teams are. And frankly, Jake did almost everything today.”

The late meltdown cost the Mets a chance to win their first game under new owner Steve Cohen. The 64-year-old billionaire completed his long-awaited purchase of the team from the oft-criticized Wilpons in November.

“Lots of excitement building up to this day and that’s not the way you want it to end,” May said.

The Phillies, meanwhile, are already in rarefied air. The 4-0 start is the second in three years but just the fourth in the 139-year history of the franchise. Philadelphia hasn’t started 5-0 since winning the first eight games of the 1915 season.

The fast start this season has been fueled by a once-flammable bullpen. After posting a major league-worst 6.92 ERA last season, Phillies relievers have allowed one run in 12 2/3 innings over the first four games.

“We all know any big loss in the ninth or any big deficit in the fourth or fifth is deflating for everybody,” Phillies reliever Brandon Kintzler said. “So the fact we can come in and attack and put up some zeroes and all of a sudden we get some momentum a little bit at a time each inning — you saw, it puts pressure on the other team.”

Stroman, who was acquired by the Mets on July 28, 2019, hasn’t pitched in a big-league game since Sept. 27, 2019. He suffered a calf injury during summer training last July and opted out of the season Aug. 10.

Stroman is 2-1 with a 3.66 ERA in five games (three starts) against the Phillies. Anderson, who signed a one-year deal with Philadelphia on Feb. 8, is 2-3 with a 4.58 ERA in eight starts against the Mets.