The statuses of Boston Celtics starters Marcus Smart and Robert Williams weren’t necessarily in question heading into Game 1 of the NBA Finals against the Golden State Warriors on Thursday.

However, both have missed time to injury during Boston’s playoff run. Each one found himself as a surprise inactive on game day in the past.

That won’t be the case for Game 1. Both Smart and Williams are active and slated to start. Per Celtics head coach Ime Udoka, Smart is “playing through pain” but is “good to go.”

The reigning NBA Defensive Player of the Year has been dealing with a multitude of injuries to his right leg. That includes his quad, ankle and foot. After playing through the ankle injury in the conference finals, Smart noted recently that it was pretty significant.

“The ankle was a pretty serious injury. I’m thankful to be able to play, let alone still be walking. It hurt, but my mom always told me, if you are going to be on the court, you can’t make excuses. If you’re hurt, then sit your tail down. If I’m going to be out there, no matter how much pain I’m in, I can’t let it affect me.”

As for Robert Williams, he’s missed multiple games to a knee injury. It started to bother the big man during the conference semifinals. He called it “manageable” in a recent Q&A with the media.

Related: Bold predictions for Game 1 of the NBA Finals

Marcus Smart, Robert Williams and their importance to the Boston Celtics

Smart is specifically important in this game in that he will be defending NBA Finals favorite Stephen Curry. Smart’s ability to play lock-down defense could play a huge role in this series.

It’s also not like the former first-round pick is a net negative on offense. He scored 24 points on Boston’s series-clinching Game 7 win over the Miami Heat in the Eastern Conference Finals. 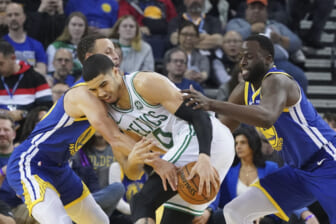 Meanwhile, Williams’ defense could loom large as a rim protector given the ability of Curry, Jordan Poole and Andrew Wiggins to slash through the lane. Boston is plus-35 when he’s been on the court thus far in the postseason.