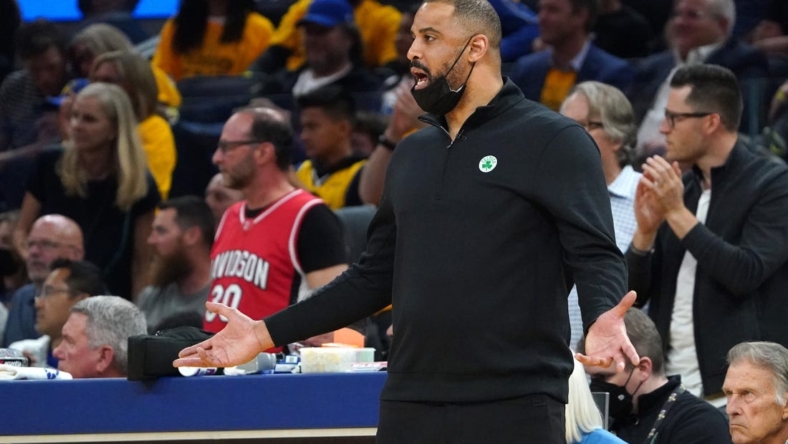 If Ime Udoka is allowed to coach the Brooklyn Nets weeks after being banished from the bench in Boston, Celtics guard Marcus Smart would like a word.

In fact, the reigning NBA Defensive Player of the Year wouldn’t mind some answers right now.

“We thought they just suspended him for the year and he’d be back. That’s why it’s confusing,” Smart said of Udoka emerging as the favorite to coach arguably Boston’s biggest rival. “I think it left a lot of people just like, ‘What the hell is going on here?'”

When Udoka was suspended before the start of training camp for what the Celtics would only describe as an inappropriate relationship with a team employee, Smart said he still had “love for Ime as a person,” but “it’s been hell for us.”

Smart said players are conflicted over the news that Udoka, a former assistant in Brooklyn, is the chosen replacement for Steve Nash with the Nets.

“His name got slandered and slaughtered and it was ‘He’ll probably never coach again,'” Smart said. “And a couple months later he’s possibly going to be the coach of one of our biggest rivals. It’s tough. It makes no sense.”

The Celtics won the Eastern Conference and went to the NBA Finals under Udoka’s guidance. The Celtics announced before training camp that a violation of team policies related to an intimate relationship with a female staff member forced the franchise to suspend the coach and promote Joe Mazzulla to the interim post.

Nets general manager Sean Marks and Udoka were assistant coaches together with the San Antonio Spurs.

Guard Jaylen Brown was more upbeat about the news on Wednesday.

“It would’ve been awesome if we could’ve figured out a way for it to be with us,” Brown said. “But I guess that wasn’t the case. I’m just happy to see a Black head coach end up back on his feet because I’ve seen situations where (with) something like this … might not have been the case.”

The Nets are 2-6 after losing to the Chicago Bulls in their first game without Nash.