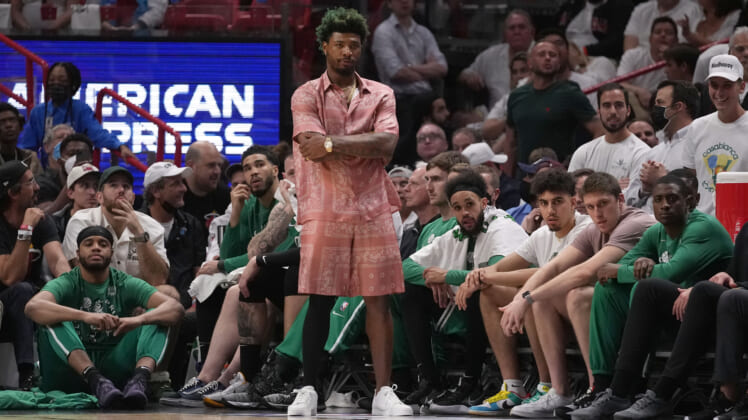 The Celtics’ best-of-seven against the top-seeded Heat did not start in the way they had hoped. On Tuesday, the team had a whole bunch of trouble in slowing down Jimmy Butler as he went off for 41 points in Miami’s 118-107 victory over Boston. However, the setback came when they were without two of their key contributors in Smart and Horford. Tonight, they will get a much-needed reinforcement from one of those players that missed Game 1.

On Thursday, USA Today NBA reporter Jeff Zillgitt tweeted an update on the Smart and Horford situations. Reporting that the guard has recovered enough from a right foot sprain that he is probable for tonight’s matchup. While Horford is officially listed as doubtful due to still being in the COVID protocols.

Boston Celtics will get Marcus Smart back for Game 2 vs. Miami Heat

Marcus Smart and Al Horford were pivotal in helping the Boston Celtics earn a 51-31 record, land the second seed in the Eastern Conference, and be one of the best defensive squads in the league. However, their loss in the opening game of this finals series was massive since both have increased their production in the postseason.

Smart is averaging nearly three more points a game in the playoffs (15.0 PPG) than he did in the regular season and has been monumental as a defensive annoyance against opponents’ top swingmen. Thirteen-year veteran Horford has seen a notable bump in both his points and rebounds in the post-season. His loss was felt in the paint with Robert Williams III still not 100% after suffering a meniscus tear in March.