Marcus Semien starting to get hot as Rangers face Rays 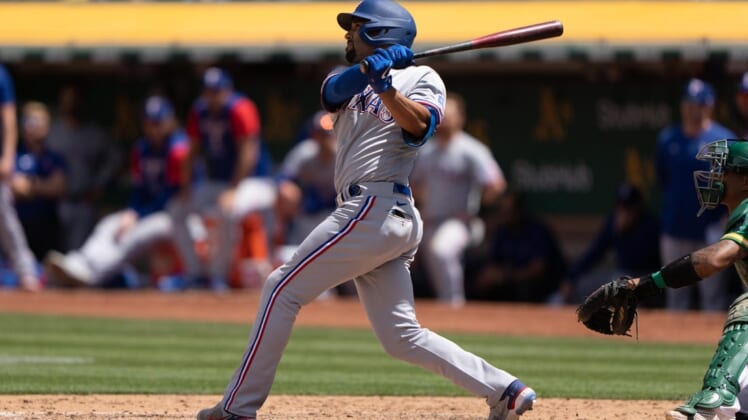 It was only a matter of time before Texas Rangers second baseman Marcus Semien began to heat up, as the 31-year-old has too much of a track record to stay in a season-long slump.

On the downside, he committed two errors in Sunday’s 6-5 loss at the Oakland Athletics.

Texas had its four-game winning streak snapped on Sunday to finish a 10-game trip 5-5.

Semien will look to stay hot at home beginning Monday night when the Rangers face the Tampa Bay Rays in the first game of a four-game series in Arlington, Texas.

“You can see what happens when (Semien) gets hits,” Rangers manager Chris Woodward said. “When he gets on base, we score runs.”

A year ago with the Toronto Blue Jays, Semien hit 45 homers, making him a coveted free agent. His first home run with Texas was a grand slam on Saturday, coming in his 44th game.

At Globe Life Field, Semien has a disappointing .129 batting average, with a .196 on-base percentage and an OPS of .361.

The Rays, on the other hand, arrive in Texas after winning four of six on their homestand. They gained a four-game split with the New York Yankees despite an inconsistent offense. On Sunday, Tampa Bay scratched out a 4-2 win despite getting just two hits — solo home runs by Ji-Man Choi and Taylor Walls.

“Taylor is a confident guy,” Rays manager Kevin Cash said. “I think he trusts in his ability. He continues to put the work in. It’s nice to see him get rewarded.”

Manuel Margot has been one of hottest hitters in the majors this month, but on Sunday he had his 15-game hitting streak snapped. Still, he’s hitting .426 with a 1.160 OPS in May.

Over the last two weeks, outfielder Randy Arozarena has started to heat up. Over his last 15 games, he’s hitting .333, with two home runs and seven RBIs.

“We’re streaky right now,” Tampa Bay center fielder Kevin Kiermaier said. “Just the nature of the game sometimes, nature of this team. There’s times when we score 10 runs three games in a row, and there’s times like this, where there wasn’t a whole lot of offense.”

Rasmussen has worked at least five innings in each of his last six starts. He comes off a victory against the Marlins, giving up three runs in five innings with seven strikeouts.

In his last start, Otto, who has never faced the Rays, gave up one run in five innings, with seven strikeouts in a win at the Los Angeles Angels.