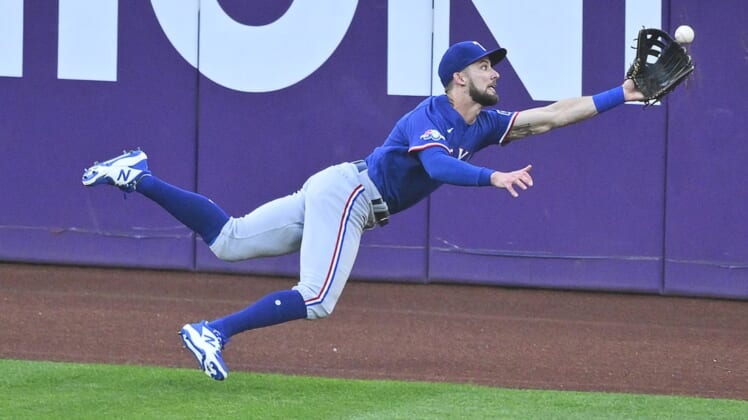 The visiting Texas Rangers blasted four home runs, including two by red-hot Marcus Semien, to defeat the Cleveland Guardians 6-3 in the second game of the doubleheader on Tuesday.

The Guardians won the first game by the identical score.

Semien was 4-for-4 with two homers in the second game. The infielder was 7-for-8 in the two games with three home runs. He came into the series batting .196 and is now at .221. Semien is 9-for-13 with four homers in his last three games.

Left-hander Taylor Hearn (4-4, 5.40 ERA) was in total command through five innings before Cleveland touched him up for three runs in the sixth inning. He pitched 5 2/3 innings and allowed four hits, three runs and two walks. Hearn fanned six batters.

Joe Barlow earned his 11th save for Texas.

The Rangers scored an important insurance run in the eighth when Semien hit his sixth home run. The 403-foot blast to center extended Texas’ lead to 6-3.

Semien is the first player with seven hits and three home runs on a single day since Joe Morgan in 1973 and he tied the team record for hits in a doubleheader.

The Guardians got to Hearn in the sixth. Oscar Mercado doubled and scored on an RBI hit by Amed Rosario for Cleveland’s first run.

Hearn walked Josh Naylor to load the bases, which was the last batter he faced. Rookie Oscar Gonzalez greeted reliever Dennis Santana with a two-run single, which narrowed the Rangers’ lead to 5-3.

Texas center fielder Eli White made three outstanding defensive plays, the most impressive in the first inning when his diving catch prevented an extra-base hit by Jose Ramirez.

Guardians left-hander Kirk McCarty (0-1) made his first major league start and wasn’t up to the task. He allowed three home runs in four innings and gave up five runs, four earned, on eight hits and no walks. He struck out two batters.

The Rangers pushed across their first run in the second inning on a throwing error by Ernie Clement, which allowed Ezequiel Duran to score.

It is the 11th game in a row the Rangers have gone deep. They have 23 homers in their last 10 games.

Things got a bit out of hand in the fourth. Jonah Heim led off by unloading a 381-foot homer to left field, his seventh home run of the season.

Duran singled and Nathaniel Lowe followed with a no-doubt 415-foot blast to center. It was his sixth homer of the season and extended Texas’ lead to 5-0.