Franchise-tagged safety Marcus Maye and the New York Jets are facing a Thursday deadline to get a contract extension in place ahead of the start of the 2021 NFL season.

Maye, 28, is set to earn $10.61 million in 2021 after signing the franchise tag tender this past spring. A former second-round pick of the Jets from Florida, he’s morphed into one of the better all-around safeties in the NFL. Last season alone, Maye recorded 88 tackles, 11 passes defended, two interceptions and two forced fumbles.

Apparently, things are not going great between Marcus Maye and the Jets. According to NFL Media’s Ian Rapoport, the Jets have not responded to the latest offer from Maye’s camp. In turn, said offer has been pulled from the table.

Rapoport expanded on this by indicating that the situation between Maye and New York “really isn’t in a good place.”

“Rapoport added that negotiations went south weeks before the franchise tag deadline when the Jets offered Maye a deal that had an average per year of about 20 percent below even the tag amount for 2021, per a source,” NFL Media noted on Tuesday. “Maye turned down the Jets offer and had significantly more in APY and guarantees from multiple teams heading into free agency. New York then tagged the safety, keeping him from cashing in.”

Roughly 20% lower than the $10.61 million franchise tag value would come in at $8.5 million. This number would rank 17th among NFL safeties. Talk about a slap in the face. 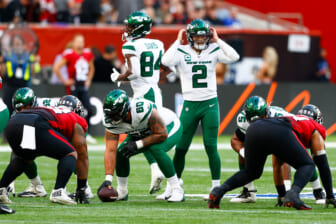