Marcus Mariota Should Play for Raiders Regardless of Carr’s Status 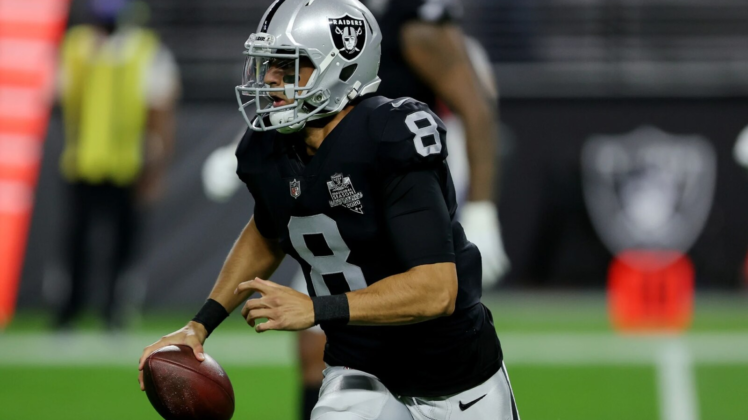 With a few days left for Derek Carr to make an attempt to play in Saturday’s game against the Miami Dolphins, Sr. NFL columnist Moe Moton says Marcus Mariota should see the field the final two weeks regardless of the starter’s status.

Take a deep breath. This isn’t about a quarterback controversy but the Raiders Marcus Mariota should play the final two weeks of the team’s season.

No, Derek Carr should not appear in NFL articles as someone on the hot seat. In the upcoming offseason, the Las Vegas Raiders have at least three major issues they need to address and none of those problems involve the man under center.

However, the Raiders should take a practical approach to the last two weeks of the regular season.

Sure, this club still has a one percent chance at a playoff berth. If the Baltimore Ravens and Miami Dolphins lose their final two games and Las Vegas wins out, the Silver and Black would creep through one of the most improbable doors to the postseason. Yet the Raiders haven’t performed at a playoff level since their Week 11 loss to the Kansas City Chiefs.

Head coach Jon Gruden isn’t going to give up on the season. His team could still finish with a winning record at 9-7—an improvement from last year’s 7-9 mark. With that said, the Raiders should contemplate the long-term benefits of using Marcus Mariota in some capacity. That doesn’t mean start him though.

If Carr can play through the groin injury, Gruden should still implement a package of plays for Mariota, and here’s why.

Add Another Wrinkle to the Offense

After the Raiders’ 30-27 loss to the Los Angeles Chargers, running back Josh Jacobs shared an observation that can help the offense going forward (h/t The Athletic’s Tashan Reed):

“He makes the defense play honest,” Jacobs said about Mariota’s ability to run. “The ends couldn’t come chase us down like they did last game we played ’em. They had to play their gaps and play their responsibilities.”

In other words, Chargers defenders had to fill their lanes because if they didn’t, Mariota would gash them for chunk yardage as he did routinely in last Thursday’s game. He recorded nine carries for 88 yards and a touchdown. The dual-threat signal-caller may have tacked on more yards and a score if Gruden trusted him on a designed run in the red zone.

Don’t forget, the Raiders have struggled for three consecutive seasons in the red zone under Gruden, converting less than 57 percent of their trips inside the opponent’s 20-yard line into touchdowns.

While Carr should remain under center for a majority of the snaps, Gruden can insert Marcus Mariota on certain downs to keep opposing defenses guessing in the final two games. With that extra wrinkle, the offense can possibly improve when in striking distance of a score.

If defenders crash down to stop the run, assuming that Mariota will tuck the ball for a rush attempt, he’s capable of pulling up and tossing an easy touchdown pass over the top.

This scenario would make more sense if the Raiders err on the side of caution and keep Carr out for at least another game. According to Gruden, he had a limited practice Wednesday.

The Raiders signed Marcus Mariota to a two-year, $17.6 million deal. He needs more than one solid performance to entice potential suitors. If Carr has a high probability of reinjuring his groin, why risk his health when Mariota is capable of filling for a short period?

Carr skeptics would view this strategy as a means to move toward change, but Mariota could do enough to garner trade interest from a quarterback-needy team that’s out of range for a top prospect in the 2021 draft or a squad in the hunt for a high-quality backup.

The league hasn’t provided clarity on the 2021 salary cap. If the Raiders choose to cut costs on the books, they can trade Mariota and draft a mobile quarterback who possesses a similar skill set, which leads us to long-term planning.

Using Mariota’s Skill Set as a Prototype for the Future

After the 2020 campaign, Carr has two more years left on his deal. He’s played well this year, but Gruden and general manager Mike Mayock can wait another year before they contemplate his contract situation.

With a closer look at Mariota, Gruden can visualize what he’d want in Carr’s successor if he chooses to move on within the next two years.

Even if the Raiders offer Carr an extension, they should keep a mobile quarterback on the roster.

As the league changes, we’ve seen an increasing number of quarterbacks who are comfortable on the move find early success. Just look at what’s happening in Philadelphia between Carson Wentz and Jalen Hurts. Taysom Hill had a few decent starts in place of Drew Brees for the New Orleans Saints. Justin Herbert’s arm looks impressive, but he also has 199 rushing yards and four touchdowns on the ground.

Through 14 games, Carr has 141 rushing yards for two scores, and he’s steadily improved his ability to scramble, though Gruden may find a way to uncover another section of his playbook with a natural ball-carrier under center.

That doesn’t mean the Raiders would discard Carr, but a signal-caller with a different skill set in the quarterback room can help the team prepare for an opponent or provide an occassional spark on game day. Gruden can take a longer look at Mariota and find those qualities in a young rookie to carry the torch as a backup and someone who can step in to play if needed—at a much lower cost.