Marcus Mariota on being benched: ‘This isn’t going to end my career’ 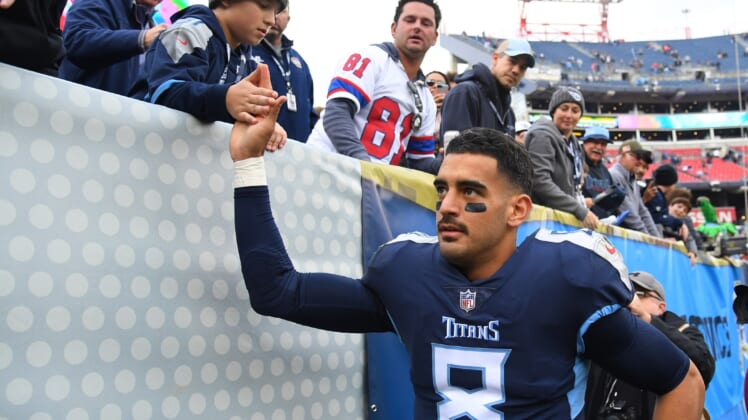 For the first time since being selected No. 2 overall in the 2015 NFL Draft, Tennessee Titans quarterback Marcus Mariota has been benched for performance reasons.

Mariota was replaced under center by veteran Ryan Tannehill during Tennessee’s shutout loss to the Denver Broncos last week. Tennessee has since named Tannehill its starter for Sunday’s game against the Los Angeles Chargers.

In talking about being benched on Wednesday, Mariota had a mature mindset.

“My expectation was always to be the best player that I could be for this team. To the day that I die, I believe that I give all that I got,” Mariota said. “No matter, I can learn and grow from this situation. This isn’t going to bring me down. This isn’t going to end my career. This is an opportunity for me to grow, and I’m going to make the most of it.”

The former Oregon star also noted that he’s going to be ready should Tennessee go back to him. Until then, he’ll be supportive of Tannehill.

This was definitely a hard move for head coach Mike Vrabel to make. Mariota is loved in Nashville. However, it’s a move that needed to be made.

The Titans head into Week 7 ranked 28th in the NFL in scoring. For his part, Mariota has combined for 31 touchdowns and 25 interceptions in 35 games since the start of the 2017 season.

It sure looks like this may be the end of the road for Mariota in Nashville. He’s an impending free agent and could use a change of scenery. That’s for sure.