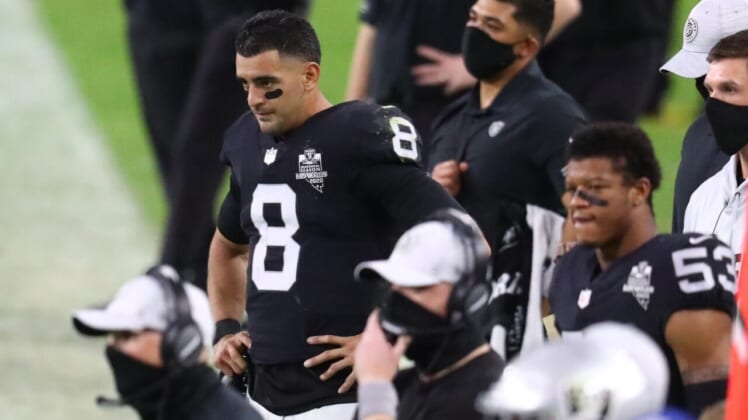 The subject of trade rumors during this offseason, the Las Vegas Raiders quarterback takes a pay cut to remain Derek Carr’s backup. The new Marcus Mariota contract is great news for the Raiders no matter how long they hang on to the Heisman Trophy reclamation project.

While the Las Vegas Raiders need to continue to work on their defense this offseason, news of the new Marcus Mariota contract – and his return to Las Vegas – was a great sign for the team’s offense for a multitude of reasons.

With Derek Carr continuing to solidify his role as the Raiders’ franchise quarterback, talks of trading backup Mariota this offseason reached a fevered pitch prior to the NFL’s new year which began last week. Sparkling in his one and only appearance in 2020, many believed Mariota’s value was higher than it was and the former overall second pick in the 2015 NFL Draft would be moved to a QB-needy team.

As many of us said, his value was greatly exaggerated and the Raiders could find no trade partners.

But, in the end, Mariota ends up back in Las Vegas – back behind Derek Carr – and that’s not a bad thing for anyone involved. The new Marcus Mariota contract means the Raiders keep a great change-of-pace QB as their backup and save on precious salary cap space. Yet, that’s not the only one of the several reasons why the return of Mariota is good for Las Vegas.

First, because the Raiders were able to play the waiting game with the new Marcus Mariota contract, they secured a true confidence-building backup quarterback for just $3.5 million (before incentives) for 2021. Mariota was due over $11 million on his previous contract which is why the Raiders were looking to unload the talented Mariota. Now that they weren’t able to trade him into a starting role elsewhere in the league, the new Marcus Mariota contract saves the Raiders having to cut the player and wonder who their true No. 2 signal caller would be.

With the NFL being a quarterback-driven league, and the maligned Nathan Peterman being the Raiders’ only other veteran backup, the return of Mariota is a great sign for the Las Vegas offense. In the event, Carr was injured or unable to play, the Raiders are now assured of having a more than serviceable backup to step in.

Second, it shows the Raiders are sticking to their plan. With fans in Raider Nation reaching insane levels of unrealistic expectations during the early free agent signing period, the team exercised patience with the work and structure of the new Marcus Mariota contract. They took risk, yes, that they could tie-up the backup QB and it paid off. In today’s hyper-sensitive, fast-paced, unrealistic world of Twitter and social media, the Raiders don’t give a damn (right or wrong) what anyone thinks. They’re going about the offseason in the way they see fit. Whether or not that works and results in a winning season and the playoffs in 2021 remains to be seen.

Third, although the new Marcus Mariota contract includes a no-trade clause, according to reports, the quarterback now is much easier to move via trade at some point – should the Raiders receive an offer they can’t refuse.

The talks about Mariota being traded before last week were nothing more than wishful thinking fueled by organizational and agent-driven narratives leaked to the media.

The Raiders, for their part, were trying to inflate the value of their backup in the hopes a QB-starved team would overpay for a player they knew would hit the free-agent market. The Raiders, badly in need of cap space, were not going to pay their Carr insurance policy over $11 million to ride the pine. This is why Mariota wasn’t in demand during the purported “QB carousel” that was expected this offseason. While Mariota certainly has an upside, he also has lingering questions about his durability, accuracy, and mental toughness. Fair or not, that’s the perception and it can only be changed once – and if – Mariota finds a suitable destination where he can reclaim the mantle of a starter.

Now that the Raiders have a new Marcus Mariota contract in place, they can roll into camp confident in an insurance plan behind Carr plus know they have a tradable asset, with a team-friendly contract, should suitors in need come calling.