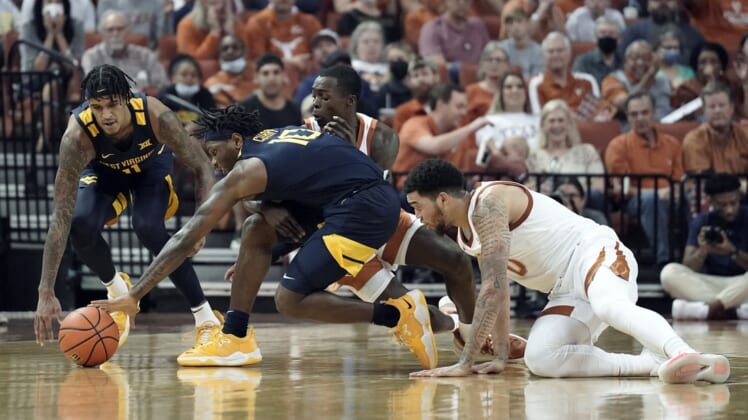 The Longhorns (11-2, 1-0 Big 12) used a decisive run in the first half to build a big lead. They did not allow West Virginia to get back in the game.

Texas was up by 19 at intermission, by as many as 28 seven minutes into the second half and easily held on to beat the Mountaineers. West Virginia was challenged to make shots with leading scorer Taz Sherman among three players out due to COVID-19 health and safety protocol.

Courtney Ramey hit for a season-best 15 points and Andrew Jones added 14 for Texas, which has won five straight games. The Longhorns are 10-0 at home and improved to 11-0 this year when holding its opponent below 60 points.

West Virginia had a season-worst 21 turnovers in the loss. The Mountaineers also played without Gabe Osabuohien and Kobe Johnson because of COVID-19 protocol.

The Longhorns never trailed in the game, but it was tied at 14 after a basket by West Virginia’s Isaiah Cottrell with 10:10 to play in the first half. Texas then reeled off 18 of the ensuing 20 points – with five different players scoring for the Longhorns during the surge – to assume a 32-16 lead.

Ramey scored 13 points in the half, which was one shy of his season high for a game.

The Longhorns’ defense stifled West Virginia in the first half, allowing only 20 points as the Mountaineers shot just 8 of 25 from the floor (32 percent) and committed 12 turnovers.