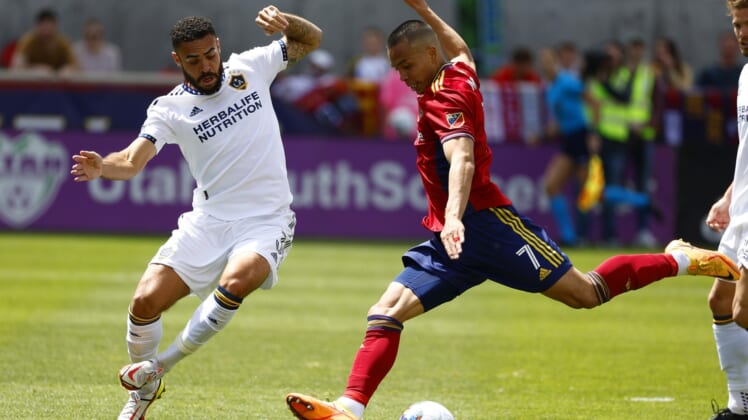 Marcelo Silva scored off a corner kick in the 49th minute to lift host Real Salt Lake to a 1-0 victory over the Los Angeles Galaxy on Saturday in Sandy, Utah.

Galaxy forward Dejan Joveljic appeared to have forged a tie in the second minute of second-half stoppage time after he settled the ball off his chest and sent a sweeping left-footed shot inside the near post. The goal, however, was overturned by video review.

Pablo Ruiz notched an assist and Zac MacMath made four saves to record his fourth clean sheet of the season and 45th of his career.

Bond made a stellar save on Bobby Wood’s bid from the top of the box to force a corner kick in the 48th minute. Undaunted, Real Salt Lake made the most of their second opportunity as Silva headed home Ruiz’s cross to open the scoring.

Silva got caught up in the moment and took off his shirt to celebrate his first goal of the season and third career. He received a yellow card for excessive celebration.

The Galaxy pressed for the equalizer in 71st minute, however Efrain Alvarez’s shot was blocked and Real Salt Lake defender Aaron Herrera headed the ball out of harm’s way while standing in front of the goal line.

MacMath came up large in the 77th minute as he denied a point-blank chance from Samuel Grandsir.

Although Los Angeles enjoyed the majority of possession in the first half, Real Salt Lake recorded perhaps the best scoring opportunity in the 36th minute. Real Salt Lake gained entry into the box before Wood’s shot was partially blocked, resulting in a save by Bond.

Alvarez attempted to answer three minutes later, however his left-footed shot from outside the box missed the top right corner of the net.