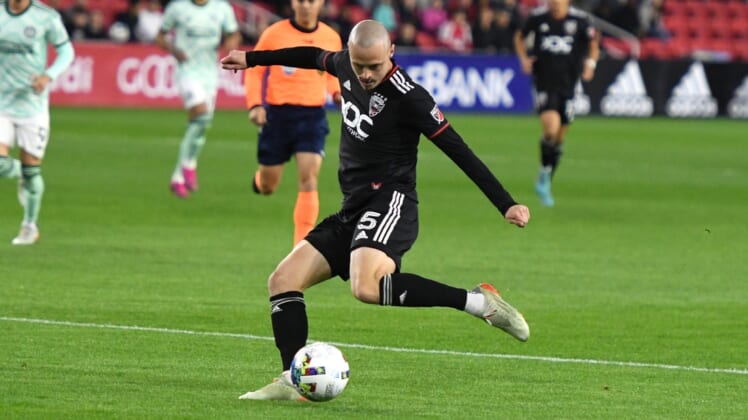 Marcelino Moreno scored in second-half stoppage time to lift visiting Atlanta United to a 1-0 victory over D.C. United on Saturday in Washington, D.C.

Brooks Lennon’s cross found Moreno, who headed the ball past Bill Hamid in the 94th minute for his first goal of the season and 12th career.

Brad Guzan made two saves to secure his first clean sheet of the season and 67th career.

Atlanta United (3-1-1, 10 points) have won five of their last six matches against D.C. United. The Five Stripes also evened their road record at 1-1-0 after they dropped a 3-0 decision to the Colorado Rapids on March 5.

Prior to the late goal, Atlanta United’s best chance to open the scoring came in the 24th minute.

Josef Martinez’s header off a cross from Thiago Almada sailed over the bar. Martinez, a former MLS MVP, has scored a goal in back-to-back contests overall and seven times in his career versus D.C. United.

Hamid alertly punched away a centering feed from Lennon in the 35th minute before making a save on Almada four minutes later after the latter wired a shot from outside the box.

Hamid also came up large during first-half stoppage time, denying Almada’s point-blank blast in the box at the near post.

D.C. United’s best chance to dent the scoresheet in the 61st minute. Julian Gressel’s cross following a corner kick found Steven Burnbaum, however his header from the box sailed just wide of the net.

Atlanta United kept the pressure on in the second half.

Franco Ibarra’s header off Lennon’s cross sailed just high of the net in the 80th minute.