Marc Badain: Was there more to his resignation as president of the Las Vegas Raiders? 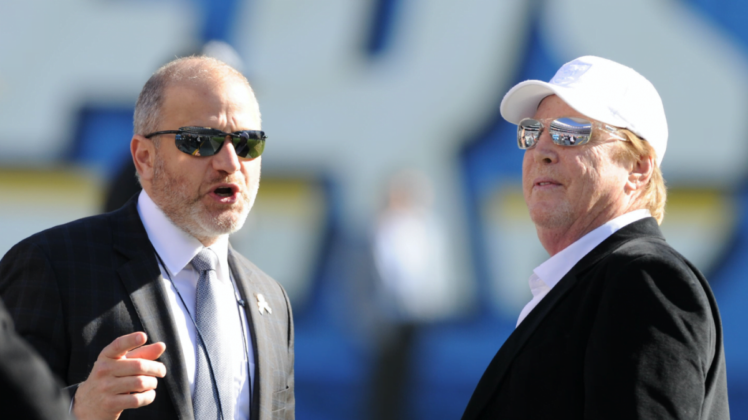 The abrupt resignation of popular and accomplished Las Vegas Raiders president Marc Badain shocked NFL insiders and Raider Nation alike on Monday. The man who made the relocation to Las Vegas and the funding and construction and funding of Allegiant Stadium a reality is moving on and there are more questions than answers as of now.

In a text message to me and other Raiders media, Marc Badain did what true pros always do – they take the high road and offer little insight into the catalyst for the timing of his departure. The president of an NFL franchise doesn’t just leave unexpectedly without questions as to why and why now.

“The successful construction and operation of Allegiant Stadium have been unequivocally the most challenging part of my 30 years with the organization,” Badain texted me and others in a statement. “Seeing it through to the end has been rewarding beyond measure. Together the Raiders and Las Vegas accomplished what seemed impossible. Now that the project is complete it is time for me to focus on my family and look ahead to new pursuits. I am forever grateful to MD for his unwavering support and friendship. I wish him and the Raider family the best. I will always feel a part of the team because everyone knows….Once A Raider Always A Raider.”

When the news broke, part of me wasn’t surprised that Marc Badain would step down. The timing was what shocked me. Just a week before the start of training camp, a planned departure would have been more gradual with some sort of succession plan in place. The fact that Marc Badain stepped down so quickly has fairly raised all sorts of questions as to why and why now.

Multiple sources inside the Las Vegas Raiders organization told me the departure was an absolute shock and “gut-punch” to a staff who holds Badain in the highest regards. Marc Badain started as an intern in the organization when it was in Los Angeles and worked his way up to the highest leadership position. As one Raiders staffer put it: “he was one of us.” Many moved from the Bay Area to Las Vegas when the team relocated because of Badain and his hands-on leadership. They’re devastated by the news.

One Raiders employee told me they think there is something more to it. Perhaps a power struggle at the top. And while that sounds like media rumor-mongering, several staffers told me they felt it was an “ambush.”

Either way, after three decades of being a loyal Raider, Badain is moving on.

Marc Badain was the point person for Las Vegas relocation

The part of me that wasn’t shocked by Badain’s departure made sense of it due to the undeniable toll a relocation of a professional sports franchise takes on the man who led the effort completely. No, he didn’t do it by himself but he certainly gave up his life – inside and outside the building – to make it a reality. Without Badain’s steadying influence, relationship development with key players in Nevada, and his ability to rally the business community to support the funding of a new stadium, it just would not have happened. Without his unending dedication and work to make it happen, who knows if the Raiders make it to Las Vegas.

The work Marc Badain did on all of it is well documented so I won’t go through the exhaustive process as I know our readers are familiar. Still, stepping away to focus on family and the next challenge makes sense – to a point.

With indications of perhaps a power struggled internally, Badain may have not had an option to leave at a different time. The sheer timing points to something else. We may never know as Badain is a smart executive and he’s not going to tell us if anything else played a factor.

While the Raiders may have not achieved the success they want on the field, off the field they have become a model franchise in many ways under Badain’s command.

Which leaves the question: why?

Again, we may never know but the ascension of new interim president Dan Ventrelle is telling, say some sources. Some believe a rivalry between the two existed and, despite Raiders owner Mark Davis’ closeness to Badain, Ventrelle might have been a reason why he left. While that’s the opinion of several Raiders employees, there’s no way to know for sure.

Organizations are complex monsters. The workings internally of the Raiders over the past 12 months aren’t readily known but something has changed and, as one source told me “more changes are coming.” Those changes were indicated by Davis himself. Are they massive changes? Only time will tell.

Either way, the resignation of Marc Badain just days before the start of a crucial training camp for a rebuilding Raiders squad again makes the kind of news the franchise is too accustomed to over the past two decades.

The Marc Badain era of the Raiders will be known primarily not for the ineptitude of the team on the field, but for the strengthening of the franchise financially and its now solid fitting in its new home of Las Vegas and its one-of-a-kind Allegiant Stadium.

One last note: Marc Badain was always open and available to the fans of Raider Nation. He never led from an ivory tower and he truly cared about the fans, even though some didn’t agree with many of the team’s decisions. Still, how many league presidents stop by tailgates or reach out to fans being bullied on Twitter. Badain did all of that and it’s a sad day for the fans now that Badain is departing a team he did so much to steady.

Marc Badain will move on, stay in Las Vegas and I expect big things from him soon. He’s well-liked locally and has made long-term relationships with the power brokers in the state. He may be moving on from the Raiders, but his impact in Las Vegas will continue.

And, as he said tonight, once a Raider, always a Raider.