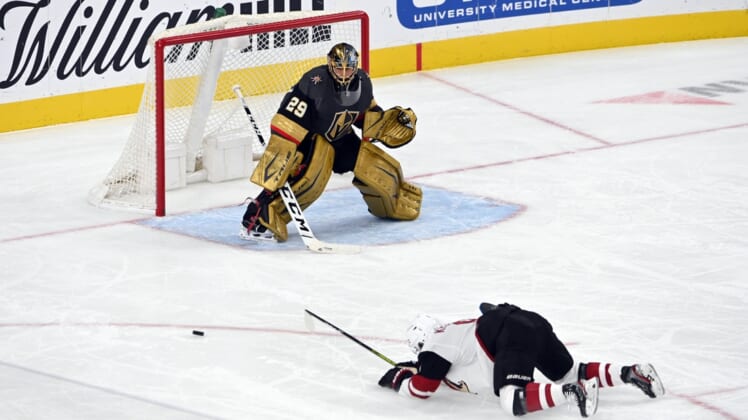 Marc-Andre Fleury made 14 saves for his five shutout of the season and moved into a tie with Ed Belfour for fourth place on the all-time wins with his 484th career victory as the Vegas Golden Knights defeated the Arizona Coyotes 1-0 on Sunday afternoon in Las Vegas.

Tomas Nosek scored the winner midway through the third period for Vegas, which completed its eighth two-game sweep of a back-to-back this season.

Fleury, who had to make just four saves in both the second and third periods, also moved into a tie for 15th place on the NHL’s all-time shutout list with Patrick Roy with 66th career shutout. The 14 shots allowed were a franchise-record low for Vegas.

Adin Hill finished with 28 saves in his 10th consecutive start for Arizona.

Vegas, which scored four goals in the span of 5:41 early in the first period of a 7-4 victory over the Coyotes in Friday’s front end of the back-the-back, had a 25-10 edge in shots on goal over the first two periods which ended scoreless thanks in great part to the goalposts.

The Golden Knights clanged the iron four times, including a crossbar and post in the first period by Max Pacioretty, who was denied his 300th career goal. Alex Tuch also hit the far post on a first period shot while Alex Pietrangelo hit another post midway through the second period. Not to be outdone, Alex Goligoski hit the post for the Coyotes early in the second period.

Nosek finally gave Vegas a 1-0 lead at the 10:38 mark in the third period with his seventh goal of the season. The score was set up by Jonathan Marchessault who scooped up a Jakob Chychrun turnover along the right boards and then backhanded a pass to Nosek cutting down the slot where he fired a wrist shot past Hill’s glove side.

Arizona had a chance to tie it three minutes later but Dryden Hunt’s shot from the left circle went off the post. Pacioretty then hit another crossbar with five minutes to go.

The Coyotes pulled Hill for an extra-attacker with 1:10 left and Fleury turned away a Conor Garland slap shot before Garland picked up a penalty for upending Mark Stone along the boards with 15 seconds to go.