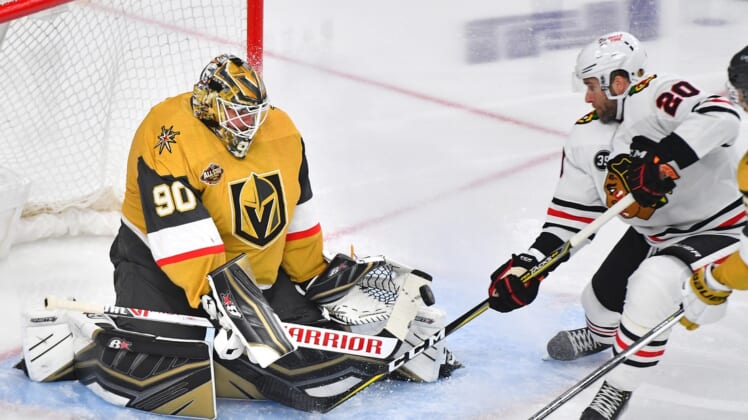 Marc-Andre Fleury made 30 saves as the Chicago Blackhawks snapped a six-game winless streak with a 2-1 victory over the host Vegas Golden Knights on Saturday night.

It was the 502nd career victory, third all-time in NHL history, for the popular Fleury who was facing the Golden Knights for the first time since being traded to Chicago last July. The Golden Knights honored the reigning Vezina Trophy winner, who went 26-10-0 with six shutouts last season, with a special tribute video before the opening faceoff.

Jujhar Khaira and Riley Stillman scored goals for Chicago. It was just the second time in 10 games all-time (8-2-0) that the Golden Knights lost to the Blackhawks. It also snapped Vegas’ 28-game streak of scoring at least two goals in a contest.

Ben Hutton scored for Pacific Division-leading Golden Knights who lost for the third time in their last four games. Robin Lehner finished with 19 saves and had a personal six-game winning streak snapped.

Vegas took a 1-0 lead at the 5:17 mark of the first period on Hutton’s first goal as a Golden Knight and first in 37 games. The defenseman fired a shot from the left point off a Nolan Patrick faceoff win through traffic into the top left corner of the net.

Chicago tied it early in the second period when Khaira finished a two-on-one rush and fired a wrist shot from the right circle under Lehner’s blocker for his third goal of the season.

Stillman gave the Blackhawks a 2-1 lead at the 14:21 mark of the second period with his first goal of the season, flipping a shot from the left point that caromed off the knee of Vegas forward Brett Howden and inside the left post.

Vegas pulled Lehner for an extra attacker with 1:48 remaining but Fleury turned away two shots, including a sharp-angle one-timer by Evgenii Dadonov from the bottom of the right circle.