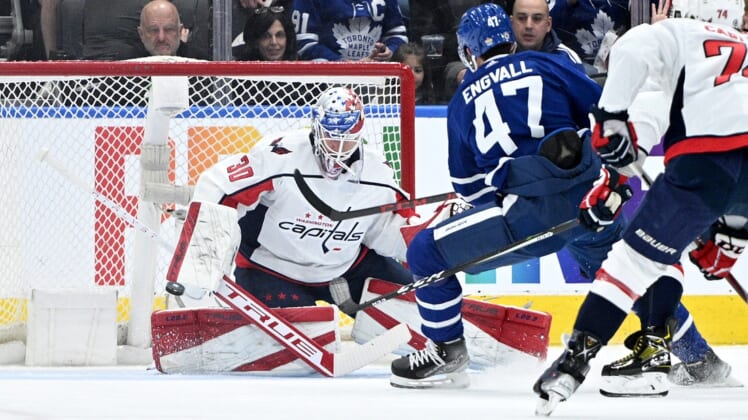 Ilya Lyubushkin added a goal and an assist for the Maple Leafs (48-20-6, 102 points). John Tavares added three assists to give him 501 for his career. Pierre Engvall, Auston Matthews and Morgan Rielly had two assists each. Rielly has 301 career assists.

John Carlson had a goal and an assist for the Capitals, who had a four-game winning streak end. Tom Wilson and Nic Dowd also scored for Washington (41-23-10, 92 points).

Jack Campbell made 22 saves for the Maple Leafs.

Ilya Samsonov allowed four goals on 19 shots for the Capitals before being replaced by Vitek Vanecek, who made 10 saves.

Poor clearing by Washington resulted in Bunting’s goal on an 18-footer at 4:37 of the first period. Bunting converted Mitchell Marner’s pass. Matthews added an assist to reach 100 points for the season.

Nylander, who missed an open net with a shot earlier in the first period, scored on a blast from above the right circle at 13:45 of the first. Engvall’s pass sprung Nylander for his burst down the right wing.

Campbell escaped unscathed after his mask came off when Washington’s Wilson ran into him while being pushed at 15:26 of the first. Wilson was given a minor penalty.

The teams scored three goals during a 4-on-4 situation in the second period. Carlson scored his 15th of the season at 10:06 from the edge of the crease after weaving around the Toronto defense.

Lyubushkin scored his first goal of the season with a 51-foot slap shot 13 seconds later.

Mikheyev tipped in his first goal of the game at 14:44.

Bunting added his 22nd goal this season at 16:25 on a pass from Engvall.