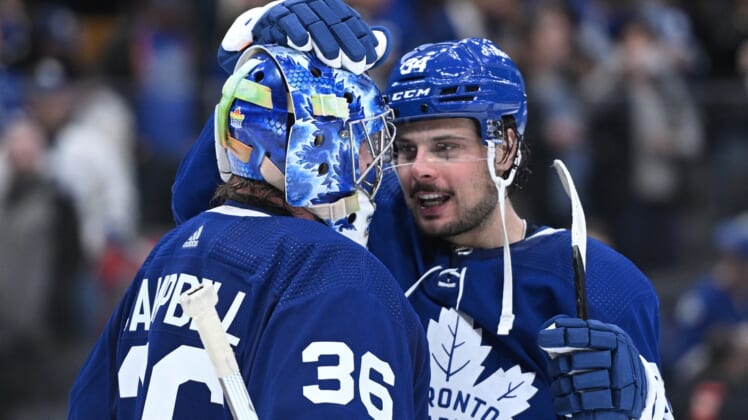 After returning to their winning ways, the Toronto Maple Leafs will look to use the last two weeks of the regular season to regain the consistency that had pegged them among the top contenders for the 2022 Stanley Cup.

Heading into Thursday night’s game against the Washington Capitals, Toronto was coming off Tuesday’s 5-2 loss to the Buffalo Sabres, which marked the second time in four games the Leafs had allowed five goals. They had just one regulation win in four games, slipping off a recent stretch of five consecutive regulation victories.

But Leafs head coach Sheldon Keefe said he liked the effort against Washington as Toronto scored two first-period goals and four in the second on the way to a solid 7-3 win.

“It was more like we’ve been playing … it was clear we were more engaged, way more engaged physically, way more pace, way more speed to our game and then everything falls into place from there,” Keefe said.

One of those who was way more engaged was forward Michael Bunting, who ended a career long 17-game goal drought with a pair, including the Leafs’ first goal of the night.

“Great for Bunts,” Keefe said. “Bunts has been doing a lot of good things, a guy who had been scoring at a really good rate and pace … he was in the right spot tonight.”

Linemate Auston Matthews, who leads the NHL with 58 goals — the most for any NHL player in 11 seasons — recorded his 100th and 101st points of the season with a pair of assists against Washington.

“It’s certainly not about me,” Matthews said. “It’s a team accomplishment and obviously a big bounce-back game for us against a really good team.”

Toronto will be without forward Ondrej Kase (concussion) and defenseman Rasmus Sandin remains without a clear timeline with a knee injury, although the club is still hoping he can make it back before the playoffs begin May 2.

Ottawa (28-40-6, 62 points) sits well behind the Leafs in the standings but the Senators have won their last two games. Most recently, the Sens beat the Bruins 3-2 in Boston on Thursday.

Senators head coach D.J. Smith noted the way the team responded after falling behind 2-0 in the first period. They scored three times in the second, with Brady Tkachuk getting it started 47 seconds into the period and Josh Norris and Tim Stutzle following with power-play goals.

“I didn’t like our intensity at all in the first period … but to the guys’ credit, the second period was a totally different mindset. We were physical,” Smith said. “We got back to playing the way we play. Got some power plays and our power play is obviously clicking.”

The 20-year-old Stutzle had a goal and two assists against Boston, giving him 18 goals and 32 assists in his second season in Ottawa.

For the Senators forward Tyler Ennis (upper-body injury) is out after being placed in the injured reserve list Thursday. Also, Mathieu Joseph (undisclosed) is questionable.