Maple Leafs, Sabres take it outside in Heritage Classic 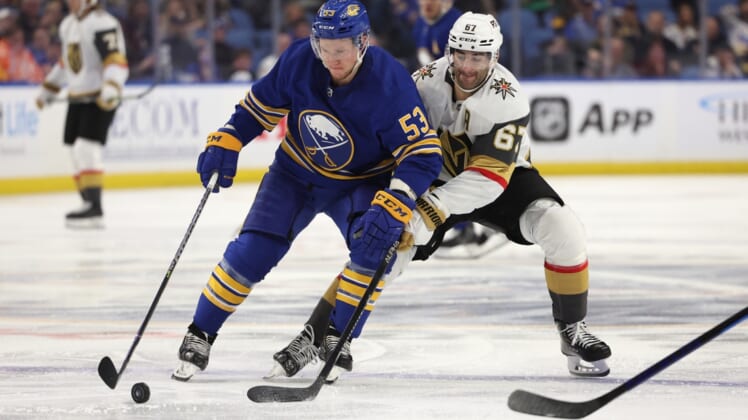 The Toronto Maple Leafs and the host Buffalo Sabres will take matters outside on Sunday when they clash in the NHL Heritage Classic in Hamilton, Ontario.

The Sabres hope that whatever they did in their 5-1 road victory over the Maple Leafs on March 2 also works outdoors on Sunday. The Maple Leafs, however, defeated the Sabres 5-4 at Toronto on Nov. 13.

Sunday’s game will be played at Tim Hortons Field, home of the Hamilton Tiger-Cats of the Canadian Football League. Capacity for the game will be approximately 24,000.

The Sabres have won three of their past five games after posting a 3-1 victory over former captain Jack Eichel and the Vegas Golden Knights on Thursday.

The Maple Leafs have had defensive and goaltending problems. They have allowed 24 goals in going 2-2-1 in their past five games, including a 5-4 overtime home loss to the Arizona Coyotes on Thursday.

No. 1 goaltender Jack Campbell, who had been struggling, will be out for about two weeks with a rib injury.

Petr Mrazek was removed Thursday in the second period after allowing four goals on 12 shots. He was replaced by Erik Kallgren, who made 10 saves in his NHL debut.

“Well it started with the first goal, early on with a bad rebound there and that set the game,” Mrazek said. “I think I didn’t help the team get through the first period where it easily could have been 0-0. No, I don’t think there were any nerves. We don’t think about those things, we just treat it like another game and like I said it was an easy first save, block save should go in the corner and the game would be different.”

“We looked at a number of different things,” Maple Leafs coach Sheldon Keefe said on Friday. “You want to give Petr an opportunity to get back in and respond. There’s the fact that it’s an outdoor game and Petr has that experience. The simple fact is that he has won 10 games. He hasn’t played nearly to his ability, but he has won games for us this season. We need to win a game.”

With Hamilton sitting between Buffalo and Toronto, the crowd is expected to be split in its allegiance.

The Sabres, however, will try to take advantage of the momentum gained from a supportive crowd in Buffalo on Thursday.

“The crowd was on our side,” said Alex Tuch, who scored an empty-net goal. “They really were. And it was electric. …it was a phenomenal feeling and to get a win in front of that big of a crowd is something that really goes a long way. We want to keep feeding off that energy and build momentum and keep that going.”

As for the Maple Leafs, Keefe said: “The goalie has to be better and our players have to be better in front of him. Let’s not shy away from that. We just have to take care of what we can.”