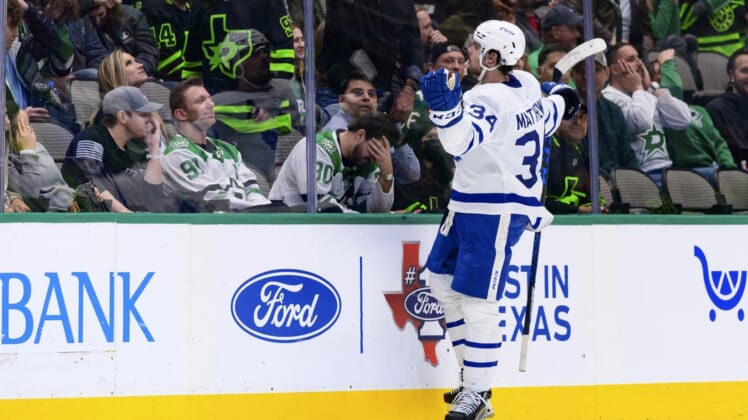 Auston Matthews set Toronto’s season goal record in regulation, then scored his 56th 2:10 into overtime as the visiting Maple Leafs extended their point streak to a season-high seven with a 4-3 win over the Dallas Stars on Thursday.

Matthews, who recorded a career-high 12 shots on goal, got his milestone 55th score with 1:02 left in the second period. In a 1-1 game, he one-timed a pass from Mark Giordano at the high circle and past Dallas netminder Scott Wedgewood (37 saves).

Amid a career season with 97 points, Matthews broke Rick Vaive’s club mark of 54 goals from 1981-82 and extended his point streak to 15 games.

Dallas tied the game 5:43 into the third, when John Klingberg drove a one-timer by Maple Leafs goalie Jack Campbell (15 saves). Toronto’s Morgan Rielly snapped a shot from the near-board circle by Wedgewood with 9:24 remaining in regulation to break the 2-2 tie.

But the Stars answered for a third time, with 2:23 left in the third, when Joe Pavelski deflected home a shot from teammate Ryan Suter. It was Pavelski’s 26th goal of the season.

In overtime, Matthews got the puck on the far board, broke toward the net and made a stellar move to beat Wedgewood.

William Nylander posted his 28th goal for Toronto, which sits second in the Atlantic Division and has 40 goals during its current 6-0-1 stretch. Teammate Mitchell Marner extended his point streak to 12 games with an assist but had his seven-game multi-point run end.

Tyler Seguin also scored for the Stars, who are in the mix for a playoff spot in the Western Conference but are 1-1-1 since winning six of seven.

Toronto pressured early and was rewarded when Nylander rang the posts off a drop pass from Ilya Mikheyev to open the scoring at the 7:28 mark of the first period. Yet, a little more than two minutes later, Dallas tied the contest after Seguin went forehand-backhand to slip the puck past Campbell.