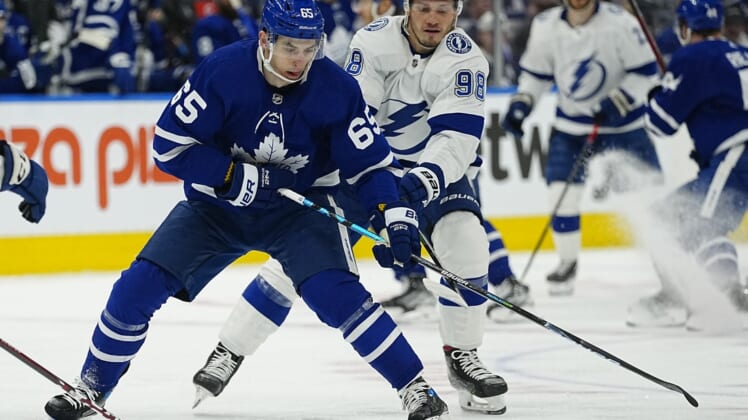 The Tampa Bay Lightning grabbed home-ice advantage in their first-round playoff series, but the Toronto Maple Leafs could have the momentum entering Game 3 at Tampa on Friday night.

A 5-3 victory Wednesday night gave the Lightning a split of the opening two games at Toronto in the best-of-seven series. Three of the next five games, as needed, are scheduled to be played in Tampa.

The Maple Leafs aren’t down and have kept the focus on scoring twice late in the third period on Wednesday as a positive step.

“It was a really good sign that we didn’t just go away,” Maple Leafs coach Sheldon Keefe said. “We made it interesting at the end and got the crowd back into it. (The 5-1 deficit) was too big a hole to come back from, but we were right there.”

The Lightning staged a comeback of their own on Wednesday after losing a 5-0 embarrassment in Game 1.

Led by Victor Hedman’s playoff career-best four points (one goal, three assists) and Andrei Vasilevskiy’s goaltending, the Lightning showed why they’re in the running for a third straight Stanley Cup.

“We take it personal,” Hedman said of the Game 1 loss. “That’s the bottom line.”

After going 0-for-5 on the power play Monday, the Lightning were 3-for-7 with the man advantage on Wednesday. They were 4-for-4 in killing penalties.

“We’ve got a good leadership group that gets us ready for games, especially bounceback games,” said Brayden Point, who scored the Lightning’s third power-play goal. “I think we were just a little more ready this time.”

Through two games, Keefe felt that not much separated his team from Tampa Bay, and being sharper and more disciplined would be a major key going forward.

“We have to take confidence in the things we did well,” Keefe said. “It’s obvious what the difference was in the game. You look at how close the game was at 5-on-5; you’ve got belief that you can turn that, and you know that it’s going to be tough.”

Mitchell Marner had a goal and an assist for Toronto and Auston Matthews added two assists.

Vasilevskiy made 31 saves and his best was with a flash of his glove on Timothy Liljegren at 1:26 of the second period. With Tampa Bay leading 1-0, Liljegren wired a shot to the top corner, but Vasilevskiy plucked the puck from the air.

Less than a minute later, at 2:21, Hedman’s stretch pass sprung Corey Perry for a breakaway goal, a key moment for the turnaround.

Toronto responded with Michael Bunting’s goal, but Kucherov scored on the power play soon after with Toronto right winger Wayne Simmonds in the box.

“We took too many penalties,” Simmonds said. “I think I was a culprit. Took two, they scored two, we lost by two. That stings. I’m a man, I can admit when I’m wrong. I don’t think you can let it take your edge away. But you have to be smart and make sure you are playing physical between the whistles.”