Maple Leafs look to get handle on turnovers vs. Blackhawks 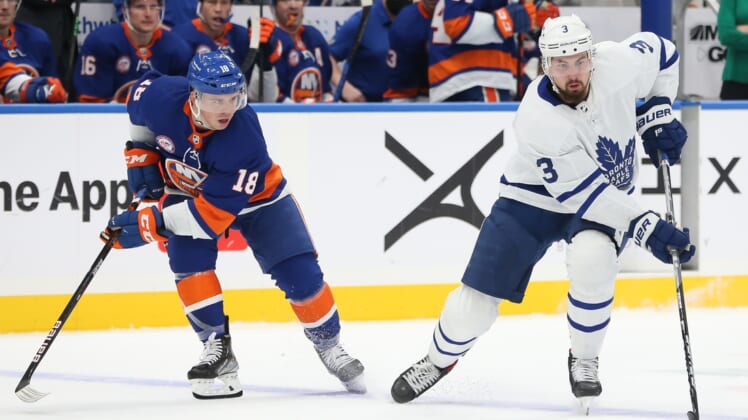 Reducing turnovers will be one goal for the Toronto Maple Leafs when they play the visiting Chicago Blackhawks on Saturday night.

The Maple Leafs committed 14 giveaways Thursday night in a 5-3 home loss to the Tampa Bay Lightning, three resulting in goals.

“That pretty much sums it up,” Toronto coach Sheldon Keefe said. “You can’t make those kind of plays and spot them three goals at five-on-five. We’ll give them the power-play goal, but the five-on-five goals are inexcusable, those are gifts against a team like that. …

“I didn’t think we played a terrible game by any means, our guys worked hard, we had our chances, but you just can’t give that type of stuff up. So, decision-making, execution with the puck, was very poor and it cost us.”

Said Toronto defenseman Justin Holl: “We gave them too many rushes for free. But we were doing really well on that win streak and know what we’re capable of.”

The Maple Leafs have lost three of their past four after winning 15 of their previous 17 games.

Auston Matthews had his seven-game goal streak end Thursday. He had an assist to extend his point streak to eight games (10 goals, four assists).

The Blackhawks are coming off a 2-0 road victory against the Montreal Canadiens on Thursday in which goaltender Marc-Andre Fleury earned his 500th career win.

“It meant a lot to have so many people from Quebec, being proud of me being from here and achieving this goal.” said Fleury, a native of Sorel-Tracy, Quebec. “Since the beginning of my career, it’s always special when I come to Montreal and play here, just because I’ve grown up idolizing them, right?”

The game also was notable because Jonathan Toews scored his first goal of the season.

Toews had gone 25 games and had taken 45 shots before his goal on Thursday. His previous goal was scored on Aug. 18, 2020, in a first-round playoff game against the Vegas Golden Knights.

“Just trying to get the feel and visualize, get the puck on your stick and going into the net, being patient,” Toews said. “You’ve got to see yourself scoring goals a lot of different ways, especially when they’re not going in and you’re trying to get over that hump. I’ll take them however I can at this point.”

Toronto and Chicago completed a minor league trade on Thursday. The Maple Leafs sent forward Kurtis Gabriel, 28, to the Blackhawks for defenseman Chad Krys, 23, who was a teammate of Matthews in the U.S. national junior development program.

Gabriel did not play in a regular-season game with the Maple Leafs and will likely get an opportunity for more ice time with Chicago. He is expected to join the Blackhawks in Toronto to provide some depth at forward with Jujhar Khaira (concussion) out indefinitely.

Krys helps Toronto’s defensive depth — the Toronto Marlies of the AHL are somewhat thin on defense with Kristians Rubins up with the Maple Leafs — with Rasmus Sandin (knee) and Travis Dermott (shoulder) injured.

Blackhawks center Dylan Strome was a healthy scratch on Thursday.

“We keep pounding it in him — the big thing with him is, he’s going to have to change his game a little bit to play,” Blackhawks interim coach Derek King said.