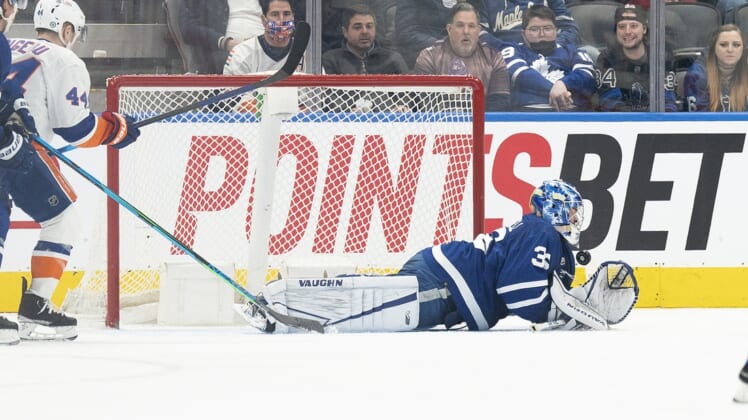 Mitch Marner, Pierre Engvall, William Nylander and David Kampf each scored a goal as the host Toronto Maple Leafs eliminated the New York Islanders from playoff contention with a 4-2 win on Sunday.

Michael Bunting had two assists and Jack Campbell made 27 saves for the hosts. Anthony Beauvillier and Josh Bailey scored for New York, which will miss the Stanley Cup playoffs after reaching the NHL semifinals each of the past two years.

At the 12:39 mark of the first, Bunting received two minutes for holding against Noah Dobson. In the waning seconds of the penalty, Beauvillier got a wrist shot past Campbell to give New York a 1-0 lead.

With 2:29 left in the first, Marner answered back with his own wrist shot to tie the game 1-1.

Bailey scored a backhander 31 seconds into the second period to give New York a 2-1 lead. Toronto would come back again at the 10:49 mark of the second, when Engvall got a slap shot on Sorokin to even the score at 2.

Two minutes later, Casey Cizikas received two minutes for slashing Simmonds. The Leafs were quick to take advantage, with Nylander scoring on a wrist shot to give Toronto a 3-2 lead.

With 5:44 left in the period, New York headed to the power play after Ilya Lyubushkin elbowed Kyle Palmieri, but the Islanders failed to capitalize.

At the 16:43 mark of the third, Zdeno Chara received two minutes for tripping Simmonds, and less than a minute into the ensuing power play, the Leafs got a 5-on-3 thanks to Adam Pelech’s delay of game. But Toronto couldn’t expand its lead and it remained a one-goal game.

Kampf scored on a breakaway on the empty net with 8.1 seconds left after the Islanders had pulled Sorokin for a sixth skater.