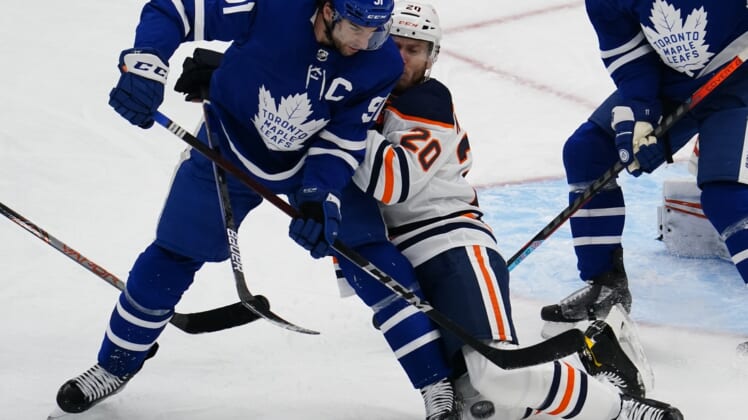 The Toronto Maple Leafs found the template to win a defensive game without a couple of top-liners. Now the question is whether they can follow the script more than once, starting with Sunday afternoon’s road clash with the Calgary Flames.

The Maple Leafs pulled off a solid 4-2 home-ice win over the Edmonton Oilers Friday night, despite being without Auston Matthews (upper body) and Joe Thornton (rib fracture). Thornton is expected to miss a month or so, while Matthews is listed as day-to-day.

“I think it’s a good sign in seeing how much pride guys take in the defensive role and especially when you face two of the better players in the league,” Leafs goalie Frederik Andersen said of his club’s performance against the Oilers, led by Connor McDavid and Leon Draisaitl. “It’s obviously a great task and it’s been great to see the team respond and really take that role seriously and not give them anything for free.”

A pair of power-play goals were the offensive key in their victory over Edmonton, but it was a solid team-first game that made the difference.

“To get a good, hard-fought win like that, you need the whole group,” captain John Tavares said. “Some guys got new, different opportunities, more opportunities, so when you come out on the right side of it … as the game went on, we got better. We started to really find our game, find our rhythm and guys stepped up and got a big bounce-back.”

The Flames haven’t played since completing a two-game home sweep of the Vancouver Canucks on Monday. While teams such as Toronto have been busier to start the season, the Flames are in a good position to benefit from a bucketload of practice time following their opening trio of games.

“These days are good for us with how many players we’re trying to assimilate into our lineup,” coach Geoff Ward said. “That allows us to reinforce a lot of things and allows us to evaluate more things, and allows our players to become more comfortable with each other. For us, it’s business as usual.”

The Flames will be without forward Dillon Dube (lower body), who was injured in Monday’s clash.

Otherwise, though, they’re feeling good about themselves and their game early in the season.

“We’ve got balanced scoring and that certainly helps, but we’ve got a variety of people that do a really good job away from the puck,” Ward said. “That allows us to do some things with our starts. The bottom line, for us — last year we felt comfortable playing two lines against anybody else, which is really what you want. Now, we feel right now that we have the potential to play three lines against anybody at any particular time. It’s been good to this point in time and hopefully it continues to trend the way it has been.”

Helping Calgary’s cause has been the play of goaltender Jacob Markstrom, who has delivered as advertised so far. The netminder signed from the Canucks via free agency to a six-year, $36-million contract has posted a 1.99 goals-against average and .935 save percentage to go with a 2-0-1 record, including one shutout, to start his Calgary career.

“We knew he is a great goalie and a great guy and great in the locker room,” forward Elias Lindholm said. “We knew what we were getting, but the way that the first period went (in Monday’s win), he stole us a point or two. We could have been out of the game right there. It’s official, now he deserves the contract.”