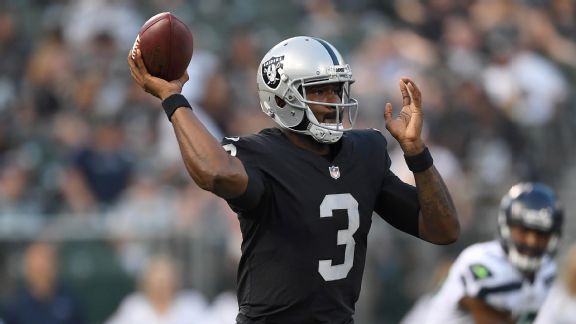 After just four weeks, the Raiders find themselves at a crossroads with their franchise player on the sideline for up to six weeks. It’s up to EJ Manuel to help them get back on track.

With Derek Carr sidelined with a back fracture for between two and six weeks, new starter EJ Manuel and head coach Jack Del Rio talked about the Raiders’ focus to get back on track.

That’s especially true if you’re team isn’t as far along as you like. Having already answered most questions about the loss of franchise quarterback Derek Carr to injury, Oakland head coach Jack Del Rio got on with it and finished quickly.

After a 2-0 start, Del Rio’s Raiders find themselves in a precarious position. They’re struggling in the running game, they’ve yet to find the consistency on offense they’d like, and their best player is out.

When asked about Manuel taking over for the injured Carr, Del Rio said he feels more comfortable since the quarterback has taken reps in both practice and a game with his current team.

“Well, I think the fact that we’ve had him here, he’s been in camp, he’s been getting reps, he played a little bit in the game the other day, is important,” Del Rio said. “Todd (Downing) worked with him previously when he got his starts in Buffalo. So, I think those are all factors that help.”

Acknowledging losing Carr is a big hurdle, Del Rio said the team is in a much better spot versus last year when his backup was rookie Connor Cook.

“Well, I mean last year in the playoff game we had a rookie making his first start,” Del Rio recalled. “So obviously, a lot better situation.”

Manuel himself is feeling confident he knows the system well, and his familiarity – and previous work with Downing – will help him adjust quickly.

“I think the only difference is the reps. I still show up at the same time. I still go home at the same time. Preparation-wise it’s still the same,” Manuel said. “Obviously, T.D. [offensive coordinator Todd Downing] is talking to me direct now instead of Derek [Carr] in meetings, but not too much has changed.”

The 2013 first-round draft pick is squarely focused on preparing for a Baltimore Ravens team he feels the Raiders match up well against on the field.

“They’re 2-2 just like we are. They have savvy vets all over the field and in the secondary and also on their D-line,” Manuel said of Baltimore. “It’s going to be a great matchup for us. I think if we can get the running game going and everything like that, as well as the passing game, we’ll be in good shape.”

The Raiders opened as a four-point favorite over the Ravens at home in Oakland.