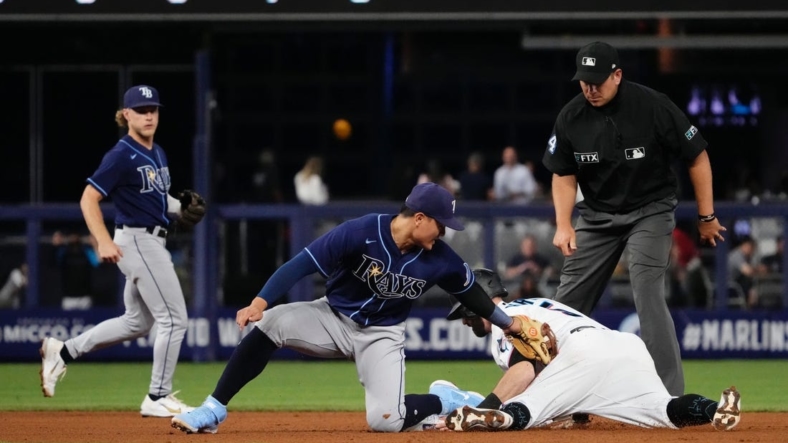 Manuel Margot blooped an RBI single with two outs in the 10th inning, leading the Tampa Bay Rays to a 2-1 win over the host Miami Marlins on Wednesday night.

Margot also saved a run in the bottom of the 10th, making a spectacular catch while crashing into the center field fence.

Miami has lost four straight and six of its past seven. Four of those defeats have come in extra innings.

Jon Berti led the Marlins, going 2-for-4 with a solo homer, a single and a stolen base. Berti, who leads the majors with 32 steals, left the game after eight innings with the team called right hip soreness.

In addition, the Marlins scratched shortstop Miguel Rojas just prior to the game due to discomfort in his right wrist.

Marlins starter Trevor Rogers, who was returning from a back injury, pitched for the first time since July 25, earning a no-decision. Rogers allowed five hits, one walk and one run in six innings, with five strikeouts in a no-decision.

Rays starter Drew Rasmussen also got a no-decision. He allowed four hits, no walks and one run in six innings, striking out four.

Miami threatened in the fourth as Berti singled and stole second, but he stayed there as the next three Marlins were retired.

Tampa Bay opened the scoring in the sixth on a rally that started with Yandy Diaz’s leadoff double to right-center. Then, with two outs, Ramirez pulled an RBI double down the third-base line.

Miami tied the score 1-1 in the bottom of the sixth as Berti homered on a 1-2 slider. Berti’s homer, his third of the season after the first two came on May 4, traveled 397 feet to left field and had a 103 mph exit velocity.

Tampa Bay threatened in the eighth as Jose Siri and Diaz singled to start the frame. However, Margot popped out on a bunt attempt, and Randy Arozarena grounded into a double play, started by Berti at third.

Miami placed runners on the corners with two outs in the bottom of the eighth, but Brian Anderson grounded out to shortstop.

Miami’s placed runner, Jerar Encarnacion, reached third with one out in the bottom of the 10th. But reliever Jalen Beeks (second save) struck out Peyton Burdick and got Joey Wendle to ground out, ending the game.

The win went to Jason Adam, who pitched around two walks to keep the Marlins off the board in the ninth.