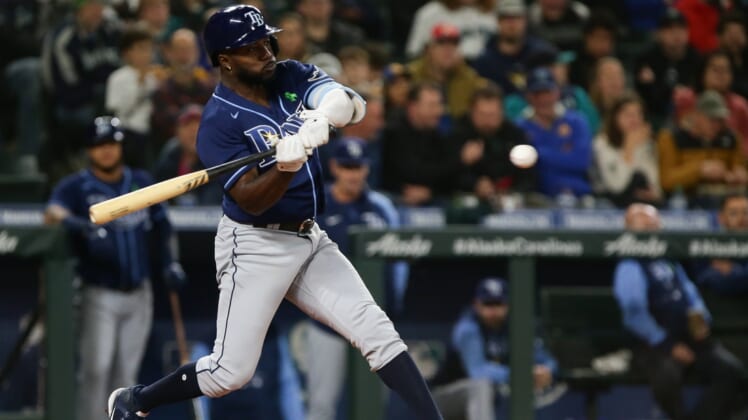 Manuel Margot blasted a one-out, three-run homer in the ninth inning as the visiting Tampa Bay Rays beat the Seattle Mariners 8-7 on Friday night for their fifth straight win.

With Tampa Bay down 6-5 after Jarred Kelenic’s pinch-hit, two-run homer in the eighth, Margot swatted a fastball from Paul Sewald (0-1) to center field in his first at-bat after entering the game on defense. One-out singles by Randy Arozarena and Brandon Lowe set up the heroics.

Kelenic ripped a 1-0 sinker from Ryan Thompson (2-1) out to right-center for his third homer of the season and his first career pinch-hit long ball.

Arozarena went 4-for-5 with a double, two runs and an RBI. Rays leadoff hitter Yandy Diaz had two hits, stretching his on-base streak to 17 games. Playing for the first time in 14 games, Francisco Mejia finished 3-for-4 with a double and a run.

The American League Pitcher of the Month for April, Mariners right-hander Logan Gilbert wasn’t involved in the decision after yielding four runs on seven hits in five innings. He struck out six and walked three.

Seattle lost for the fifth straight time and has dropped four of five against the Rays this year.

In the bottom of the first inning, Frazier hit a leadoff double, and three batters later, Suarez jumped on a 1-1 hanging slider and drilled a shot to left field for an early 2-0 Seattle lead.

The visitors took their first lead in the second inning with three consecutive two-out RBI singles by Diaz, Wander Franco and Arozarena.

The Mariners regained the lead in the fourth with two walks and two hits against bulk-innings reliever Josh Fleming, who allowed Abraham Toro’s sacrifice fly and Dylan Moore’s run-scoring single.

In the fifth, Arozarena doubled and scored on Suarez’s throwing error for a 4-4 tie.

The Rays produced their second lead in the seventh when they scored once after filling the bases with no outs on a walk, a single and a hit batter. Harold Ramirez’s fielder’s-choice grounder drove in Franco for a 5-4 lead.

Suarez banged his second long ball of the night — his sixth of the season — off Thompson to open the ninth, but Brooks Raley came in and retired the next three batters for his third save.