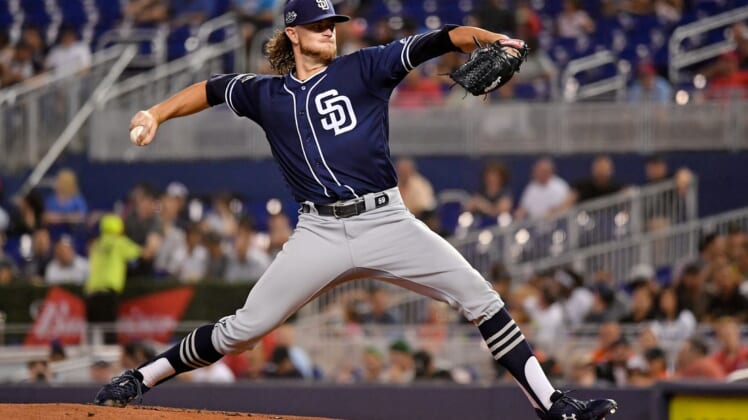 Martinez (2-2) delivered his best start of the season to outduel Miami’s Jesus Luzardo in the opener of a four-game series. The San Diego right-hander allowed one run on four hits and a walk with four strikeouts, lowering his ERA from 4.12 to 3.38.

After giving up a run on three singles in the third inning, Martinez retired 13 straight Miami hitters to end his outing. Martinez equaled his season high of 102 pitches.

Machado hit his sixth homer of the season into the Padres’ bullpen with two out in the first inning. No. 7 came with one out in the fourth and sailed into the second deck at Petco Park in left-center.

San Diego won for the third time in four games while Miami dropped its fifth game in a row.

Machado produced his ninth multi-homer game at Petco Park, a record at the 18-year-old venue.

Luis Garcia followed Martinez to the mound and allowed a two-out single in a scoreless eighth for the Padres. Taylor Rogers then earned his National League-leading 11th save with a perfect ninth.

Miami scored their one run to tie the game at 1-1 in the top of the third on three hits, although an inning-double play denied the Marlins a potentially bigger inning.

Miguel Rojas and Payton Henry, the Nos. 8 and 9 hitters, opened the inning with back-to-back singles. After Jazz Chisholm Jr. flied out to center, Jesus Aguilar singled home Rojas to tie the game. However, Jorge Solar followed with a grounder to short that Ha-Seong Kim turned into the rally-killing double play.