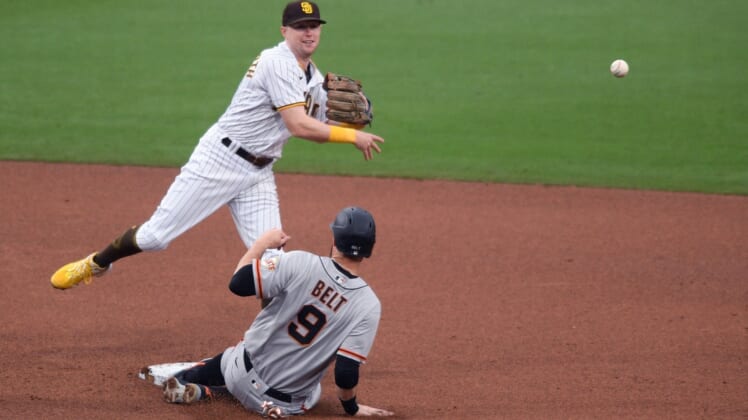 After giving up Machado’s fourth homer of the season, DeSclafani faced the minimum number of hitters through six innings.

Trent Grisham singled to open the game and moved to second when Fernando Tatis Jr. drew a walk. Machado then drove a 1-and-2 pitch beyond the fence in left center for a quick 3-0 Padres lead.

The Giants were trailing by a run when the Padres scored three runs in the bottom of the eighth against the Giants’ bullpen. Jurickson Profar led off the inning by homering on the first pitch offered by reliever Camilo Doval to make it 4-2. Jake Cronenworth added a two-out, two-run single off Jose Alvarez.

Only two more Padres reached base against DeSclafani. Tommy Pham singled to open the second, but the inning ended when starting pitcher Blake Snell grounded into a double play. Wil Myers drew a two-out walk in the fourth, but was thrown out trying to steal second by Buster Posey.

DeSclafani (2-1) took the loss despite allowing three hits and two walks with three strikeouts in six innings. The right-hander’s ERA climbed from 1.50 to 2.00. Snell picked up the win, his first decision in six starts as a Padre. Snell worked five innings, allowing two runs (one earned) on five hits and three two walks with six strikeouts.

Meanwhile, the Giants squandered excellent scoring opportunities for the second straight night. They are 2-for-14 with runners in scoring position in the series and have scored only one run in four bases-loaded opportunities, three of which resulted in no runs with less than two outs.

The Giants had the bases loaded with one out in the fourth when Wilmer Flores grounded into a double play. An error by second baseman Cronenworth and a two-out single by Darin Ruf produced a second run in the fifth. The Giants then loaded the bases before Snell struck out Brandon Belt to end the inning.

Padres relievers Austin Adams and Emilio Pagan each struck out the side in the seventh and eighth, respectively.