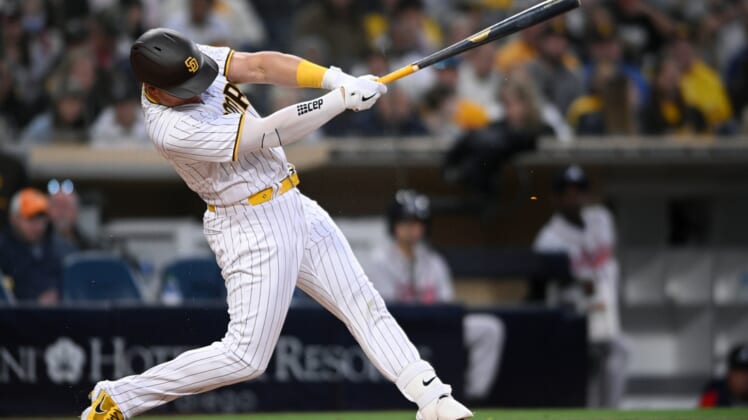 Manny Machado tied his career high with five hits, capped by a two-run homer, as the San Diego Padres opened their home season with a 12-1 rout of the defending World Series champion Atlanta Braves on Thursday.

Machado went 5-for-6 with four runs and two stolen bases. He flied out to center in the eighth while attempting to tie the Padres record of six hits in a game. Machado’s only other five-hit game came on July 7, 2014, against the Washington Nationals while playing for the Baltimore Orioles.

Machado wasn’t the Padres only force in the Padres’ 16-hit attack.

Eric Hosmer had four hits, including a two-run, two-out, first-inning single that got the San Diego offense rolling against Atlanta starter Charlie Morton (1-1).

San Diego ended a two-game skid while Atlanta dropped its second game in a row.

The Padres scored three runs in the first off Morton.

With one out, Morton hit Austin Nola with a pitch. After Machado singled, Morton plunked Jake Cronenworth with a pitch to load the bases. Morton then struck out Voit, but Hosmer dropped a single into center to give the Padres a quick 2-0 lead. Myers followed with an RBI single.

After Abrams’ leadoff homer in the second, Machado and Cronenworth had back-to-back singles ahead of Voit’s double that made it 5-0.

Voit added a two-run single in the sixth off left-handed reliever Sean Newcomb. Machado hit his two-run homer in the seventh off left-hander Will Smith, and the Padres added three more off right-hander Tyler Thornburg in the eighth, capped by a Nola RBI single.

Ozzie Albies homered leading off the ninth off right-hander Pedro Avila for the Braves’ only run.