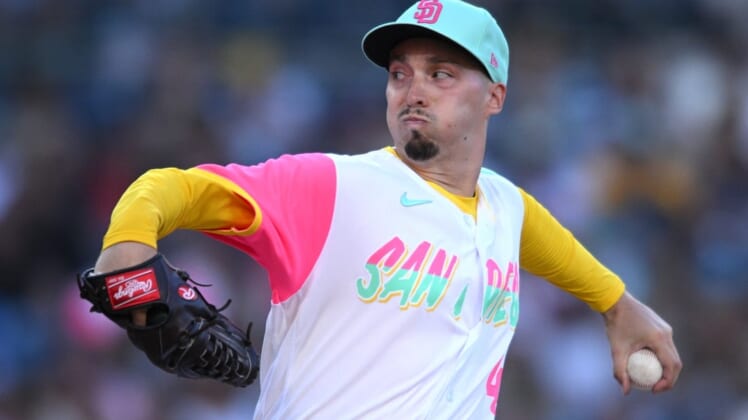 Manny Machado celebrated being named an All-Star Game starter with a three-run, first-inning homer and Blake Snell struck out 11 in six innings as the San Diego Padres defeated the visiting San Francisco Giants 6-3 on Friday.

It was the fifth straight win by the Padres over the Giants, who have lost eight of their past nine games overall and are 4-14 over their past 18 games.

Snell (1-5) entered the game with a 5.13 ERA and the Padres were 1-8 in his starts this year, but he held the Giants to one run on three hits and two walks.

Former starting pitcher Nick Martinez picked up his third save, giving up two runs on two hits and two walks with three strikeouts in three innings.

The Padres led 3-0 before Giants opener Sam Long (0-2) retired a hitter in the first inning.

Ha-Seong Kim led off with a single to right. Jake Cronenworth followed with his 21st double to put runners at second and third. Machado then launched a 433-foot drive into the second deck in left. Machado has homered in each of the first two games of the four-game series.

In the sixth, Giants reliever Zack Littell struck out the first two hitters before issuing back-to-back walks to Jose Azocar and Trent Grisham. Pinch hitter Jose Mazara drove home Azocar with a single to center for a 4-1 lead.

In the eighth, San Diego’s Eric Hosmer greeted reliever Jake McGee with a single. Pinch runner C.J. Abrams reached second on a wild pitch and scored on Mazara’s single. Mazara came around on back-to-back singles by Kim and Cronenworth.

Brandon Belt socked a two-run, pinch-hit homer off Martinez with two outs in the ninth.

Long gave up three runs on four hits and no walks with two strikeouts in 2 1/3 innings.

There was good news on Padres left fielder Jurickson Profar, who was carted off the field Thursday night after colliding in left field with shortstop Abrams. Profar was placed on the seven-day concussion injury list and also sustained a neck strain, but he suffered no broken bones or other damage.

The Giants lost Tommy La Stella to the COVID-19 injury list on Friday.