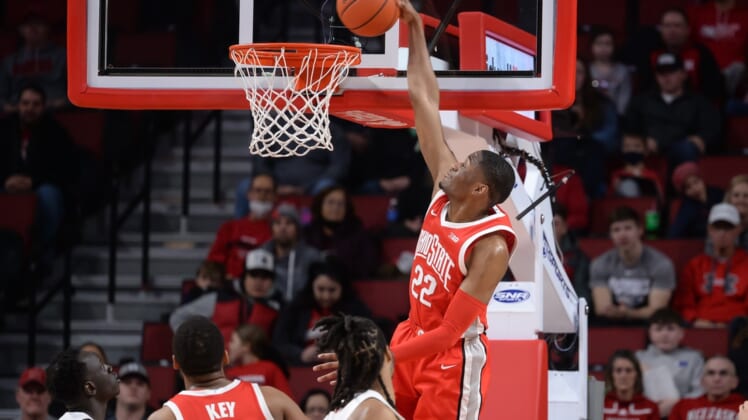 Freshman Malaki Branham more than tripled his career high with 35 points when No. 13 Ohio State held off Nebraska 87-79 in overtime in Lincoln, Neb., on Sunday.

Jamari Wheeler had six of his 16 points in overtime and E.J. Liddell had 10 points, half his season average.

Bryce McGowens led the Cornhuskers with 18 points and Derrick Walker scored 15 points and had 10 rebounds.

Wheeler’s second triple of overtime gave the Buckeyes an 81-75 lead. After McGowens made a pair of foul shots, Branham drained a jumper and Liddell made two free throws with 31 seconds left for an 85-77 lead.

In regulation, Branham’s long jumper cut the Nebraska lead to 70-67 with two minutes left. Lat Mayen’s dunk made it 72-67 prior to Wheeler’s triple with 28 seconds left to trim it 72-70.

E.J. Liddell made a pair of free throws with nine seconds left to tie the score and Gene Brown blocked a second-chance try by Walker with two seconds left to send the game to overtime.

Branham, the 2021 Ohio Mr. Basketball from the same high school as LeBron James (Akron St. Vincent-St. Mary’s) eclipsed his previous best of 11 points in the first 13 minutes with a 3-pointer for a 22-19 lead. He followed with a dunk two possessions later.

While Branham was hitting 5 of 8 from beyond the arc in the first half, his teammates were 2 for 11.

He did not score in 14 minutes of playing time versus Wisconsin in the Buckeyes’ previous game.

Ohio State played for the first time since Dec. 11. They had three games canceled because of COVID-19 issues and Liddell and Justin Ahrens were in health and safety protocol because of the virus.

Additionally, Kyle Young (10.0 points, 6.7 rebounds per game) did not play because of a non-COVID-19 illness.