Southern California native Malachi Nelson was expected to be the next great quarterback in a long line of ones to play under Lincoln Riley at Oklahoma.

That was before Riley, 38, made the shocking decision to move on from the Sooners and take the USC Trojans job.

Nelson announced Sunday evening that he has decommitted from Oklahoma and will weight his options. In said announcement, the 6-foot-3 signal caller did indicate that he’s not opening up recruiting.

” I want to start by thanking all the coaches and staff at OU for seeing enough in me and recruiting me to be a part of Sooner Nation. One of the things that attracted me most to OU, other than the rich history and amazing fans, was the stability in the coaching staff and their ability to develop wht QB positions,” Malachi Nelson announced via his Twitter page. “In light of recent events and changes, my family and I believe it’s best if I de-commit from OU at this time. I want to thank all the Sooner fans for the relentless love and support they’ve shown. I’m not opening up my recruitment. I Just want to see how everything transpires. 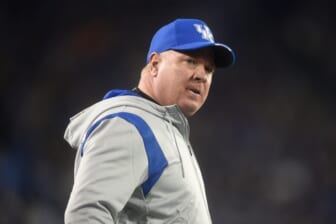 It stands to reason that the Trojans would be favored to land the five-star recruit and No. 2 overall player in the class of 2023. In fact, reports suggest that this might be the case.

There’s no real surprise here. Under Riley, the Oklahoma Sooners have been a quarterback factory for the NFL. That includes current starters Kyler Murray, Baker Mayfield and Jalen Hurts with both Murray and Mayfield earning Heisman honors under Riley.

This move comes on the heels of wide receiver Brandon Inniss and running back Treyaun Webb pulling out of their commitments from Oklahoma. Inniss is considered the sixth-best recruit from Florida in 2023 while Webb finds himself No. 152 overall in ESPN’s rankings.

As for Nelson, the Los Alamitos High School product has tallied 73 total touchdowns against 18 interceptions in three seasons. This past year saw him put up 39 scores with nine picks.