Make No Mistake: Chiefs Game is a Playoff Game 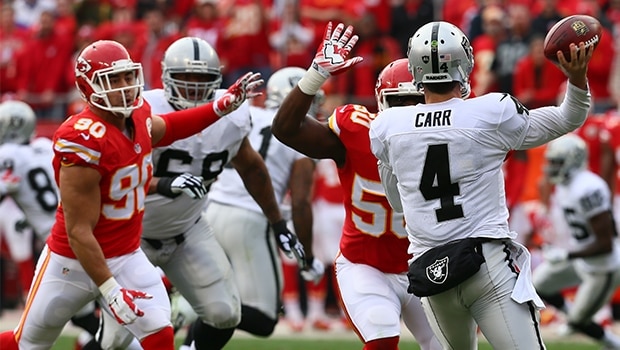 The Raiders travel to Kansas City this weekend for another divisional showdown with the Chiefs. It may just be Week 14 of the 2017 NFL season, but it marks the start of the playoffs for the Jekyl and Hyde Oakland squad.

You’re looking at the Oakland Raiders schedule and saying to yourself: it’s Week 14 and there are four games left, how is this a playoff game?

With the way this weird and uncomfortable Raiders season has unfolded, it’s not surprising the home stretch will be something out of the Twilight Zone as well. While Rod Serling isn’t around to narrate this teleplay, I’m here to explain why this game is THE game of the season – at least for now.

The Raiders stand at 6-6 and don’t have much room for error down the stretch. Their schedule isn’t as easy as the Chiefs or Los Angeles Chargers here in the waning days of 2017. They’ve rarely shown offensive consistency enough this year to declare they’ve turned some sort of proverbial corner. Yet, here they are, in the thick of the AFC West championship race. An AFC West crown almost certainly the only way they will make the playoffs in 2017.

Back to this weekend’s game against Kansas City and why it’s a playoff game for the Silver and Black.

The AFC West is a three team race between Oakland, KC, and LA.

The Raiders bested the Chiefs in an instant classic back in October scoring 10 points in the last quarter to vanquish their arch rivals at home. It’s going to take a similar effort in Kansas City – traditionally a tough place for them to play – for the Raiders to win and keep their slim and improving playoff hopes alive. They have to play with a focus we’ve seen just a few times this year and fly out of the heartland with a win. They have to play the rest of this season like a sudden-death football tournament where the loser goes home – because it’s the truth for them.

Now, to be fair, the Raiders still could lose possibly one of their non-AFC West games and still win the AFC West and make the playoffs. A loss against the Eagles or Cowboys wouldn’t kill them if they can beat the Chiefs and then the Chargers on New Year’s Eve. There are other scenarios by which they could lose more and still win the AFC West (depending on how KC and LA perform) but we’ll stay focused on their path based on what they control.

The Raiders do have some positive momentum going into the game against Kansas City. For the first time since Weeks 1 & 2, they’ve won two straight and four of their last six. On the flip side, the Chiefs have lost four-straight and are 1-5 since starting 2017 5-1.

For this guy, the Chiefs losing streak worries me more than it comforts me. Facing a desperate team at home in December isn’t my idea of a perfect scenario. Maybe I am being pessimistic but my hope is the Raiders are better prepared this week than they have been all season. They will not only need to execute their game plan to perfection, but they’ll also need to have some of the breaks go their way. I can’t remember the last time that happened for the Raiders in Kansas City.

Still, you have like the team has this opportunity. Not only can they make a statement about themselves as a team, but they have the opportunity to do it against a hated rival. On the road. You couldn’t script it any better.

The perfect ending could come a few weeks from now in Los Angeles where it’s almost certain the Raiders will play the Chargers in a pseudo home game at the StubHub Center in Carson. The Chargers are outdrawn by visiting fans each week and LA is a Raiders town. But first, they have to exorcise demons in Kansas City and at Arrowhead Stadium.

This game is their first round playoff and it doesn’t matter how they ended up in the position they’re in. The opportunity is there for this team, for this coaching staff, for this organization. We’ll learn a lot about them by how they come out and show Raider Nation just how much they want it.