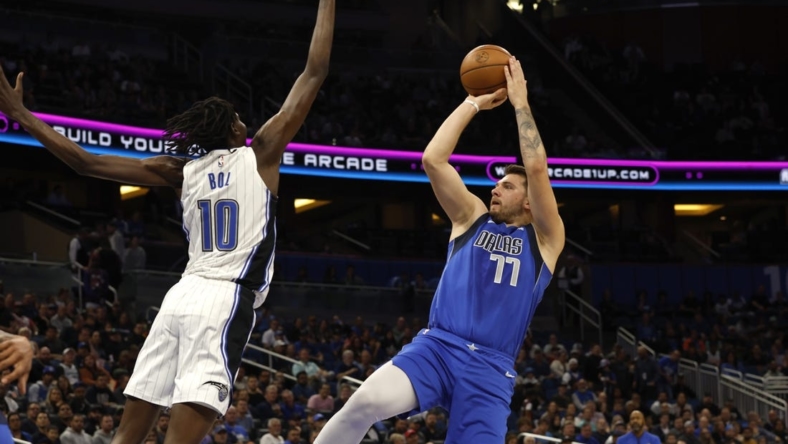 Franz Wagner led a balanced attack with 22 points and the Orlando Magic overcame the absence of star rookie Paolo Banchero with a stifling fourth-quarter defensive effort to stun the visiting Dallas Mavericks 94-87 on Wednesday night.

Riding a four-game winning streak into town and taking a 74-73 lead into the final period, the Mavericks added just 13 points in the final 12 minutes of a game moved up two hours to help the visitors get out of town before a pending storm.

Hoping to end a two-game losing streak, the Magic trailed 81-78 following a JaVale McGee tip-in with 8:34 to go.

But while Dallas was able to add just two points in the next six minutes, the Magic went on a 12-2 run to open a seven-point advantage. Chuma Okeke hit the big hoop of the key stretch, a 3-pointer.

The Mavericks never got closer than five after that.

Wagner’s 22 points came on 9-for-17 shooting for the Magic, who learned shortly before the opening tip that Banchero would be unable to go because of a sprained left ankle suffered Monday against the Houston Rockets.

He is considered “day-to-day,” the Magic reported.

Wendell Carter Jr. had a 13-point, 12-rebound double-double for Orlando, while Jalen Suggs and Mo Bamba chipped in with 12 points apiece and Bol Bol had 11.

Bamba hit five of his eight shots and Bol four of his six as the Magic outshot the Mavericks 49.3 percent to 37.6 percent.

Spencer Dinwiddie paced the Mavericks with a game-high and season-best 29 points on a rare off-night shooting by Luka Doncic, who misfired on 20 of his 29 attempts while totaling 24 points.

No other Maverick scored more than eight points, and none had more than six rebounds in a game in which the visitors were dominated on the boards to the tune of 49-29.