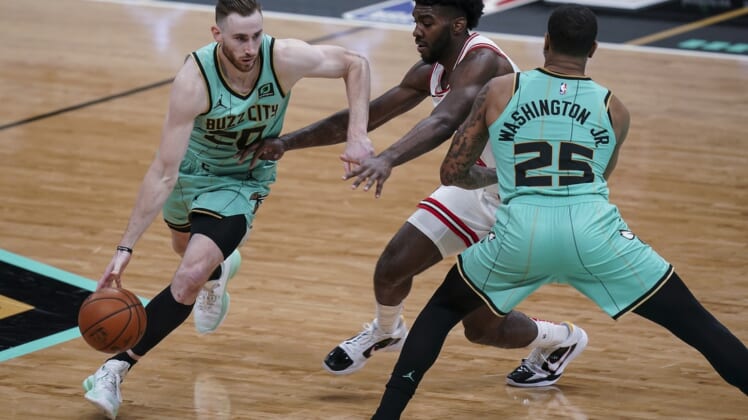 The Charlotte Hornets are in need of rediscovering good vibes. They share that distinction with the Orlando Magic.

The teams will try to reverse the wrong-way trends when they meet Sunday night in Orlando, Fla.

“We’re going to have to be a really good defensive team,” Magic coach Steve Clifford said of what it might take for things to turn around.

The Magic have lost seven of their past eight games, including Friday night’s 120-118 overtime decision at Indiana. That marked the conclusion of a 1-4 road swing.

“That was our game to win,” Orlando swingman Aaron Gordon said. “We had it. It felt like we gave it away.”

The Hornets enter this outing having played just once in more than a week’s span and will try to snap a season-worst four-game losing streak.

This is the first of two games between the teams on consecutive nights on the same court. For the Magic, it’s the launch of a four-game homestand.

The Hornets and Magic have been hampered by turnovers, something both squads say need to be addressed in advance of Sunday’s game. Clifford said that already has been the primary point of emphasis offensively.

Improving the overall performance is something that needs to take place for the Magic.

Evan Fournier scored 26 points for Orlando in its most recent game, marking the first time he topped the team in scoring since the season opener. This might be more evidence that he’s rounding into form after missing nine games with back ailments.

“He’s a terrific competitor and he badly wants to win,” Clifford said of Fournier’s efforts.

Still, the setback came after rookie Cole Anthony’s buzzer-beating 3-pointer gave the Magic a win in their previous game at Minnesota.

“We should have won that (game vs. Indiana),” Fournier said. “It’s really hard to swallow.”

In Friday night’s 123-110 home loss to the Chicago Bulls, the Hornets relied on Gordon Hayward’s big third quarter on his way to 34 points to keep them within striking distance. There needs to be other contributors.

“There’s other bodies out there that have to produce,” Hornets coach James Borrego said. “Other guys have to step up and play better.”

Devonte’ Graham had 22 of his season-high 24 points in the first half for the Hornets, who were hindered by 20 turnovers through three quarters.

Charlotte center Cody Zeller was back in action for the first time after suffering a broken hand in the season opener. He logged 11 minutes in his return, notching five points.

Now, it will be important for the Hornets to develop rhythm with Zeller among the post players.

“To have that as your first game back, I thought he was solid,” Borrego said. “Moving forward, I have to figure out rotations and what’s best for our ball club.”

The two games in Orlando will be the only meetings between the teams this season.