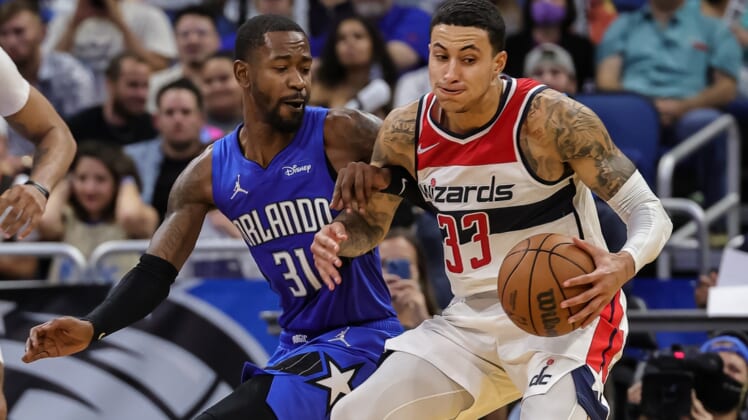 The Washington Wizards continue a long homestand on Wednesday with their second meeting in four days against an Orlando Magic squad that continues to improve despite another long losing streak.

The Wizards won the first game of a back-to-back on Tuesday, defeating the Oklahoma City Thunder 122-118 as Kentavious Caldwell-Pope banked in a go-ahead 3-pointer with 31.5 seconds left and Kyle Kuzma finished with 29 points. Washington’s 15-day, eight-game stretch at home follows a two-game road trip that ended with a comeback win in Orlando.

The secondary storyline deals with Washington’s roster as leading scorer Bradley Beal re-entered the league’s health and safety protocol prior to the Oklahoma City game.

Washington’s Montrezl Harrell came back after missing seven games in COVID-19 protocol, while Anthony Gill also cleared protocol but did not play on Tuesday. Meanwhile, former first-round pick Rui Hachimura made his season debut over the weekend against Orlando, and center Thomas Bryant (left ACL recovery) is nearing a return, as well.

Orlando bigs Mo Bamba (toe) and Wendell Carter Jr. (hamstring) are questionable for Wednesday. But the Magic — who have lost a season-high nine straight games — no longer had any players listed in the protocol.

On Sunday, Washington trailed Orlando 79-72 early in the fourth quarter, but the Wizards made several key plays at both ends of the floor to secure a 102-100 victory.

“We knew going in that this team (Orlando) was going to be difficult,” Washington coach Wes Unseld Jr. said after Sunday’s game. “They’ve shown it time and time again. You watch them, they compete at the highest level. They keep coming, and I give them credit.

“Jamahl (Mosley, the Magic coach), his staff, those guys, they really play hard. So, even when the shots aren’t going, they continue to guard and do a lot of those little things that keep them in games.”

Kuzma scored 14 of his 27 points in the final period — including a 3-pointer with 3:10 left that gave Washington a 95-89 lead — and the Wizards held on for their 10th road win. Beal, who finished with 20 points, and Kuzma also came up with clutch defensive efforts during Orlando’s final possession to deny Gary Harris’ 3-point attempt as well as Chuma Okeke’s put-back at the rim.

Kuzma cleared a career-best 22 rebounds against Orlando, making him the first Wizards player with a 20-20 game since 2010. The 6-foot-9 forward also became the franchise’s fourth player with 20-plus rebounds in a game over the past 10 years.

In Washington’s two wins over the Magic this season, Kuzma averaged 22 points and 16 rebounds while shooting 16-for-33 from the field.

The Wizards sank 54 percent of their field-goal attempts against the Thunder, paced by Kuzma’s 12-for-17 effort. Washington guard Spencer Dinwiddie had 22 points and 10 assists.

Orlando owns the worst 41-game record in franchise history, but the Magic had opportunities to win each of their opening five games in January. And that coincides with published reports that the team extended the contracts of president of basketball operations Jeff Weltman and general manager John Hammond through the 2025-26 season.

One reason for optimism is the recent play of sharpshooter Terrence Ross, who totaled 111 points in five games since clearing protocols. Ross, who shot 49 percent (40-for-82) from the field over that stretch, poured in 16 of his 32 points on Sunday during a red-hot third quarter.

“The outcomes haven’t been what we like, but we’re sticking with it,” said Ross, who scored 20 consecutive points in the second half against Washington to tie Tracy McGrady’s team record. “And we’re learning, we’re growing, we’re making improvements. So, we’re gonna get over this hump eventually.”