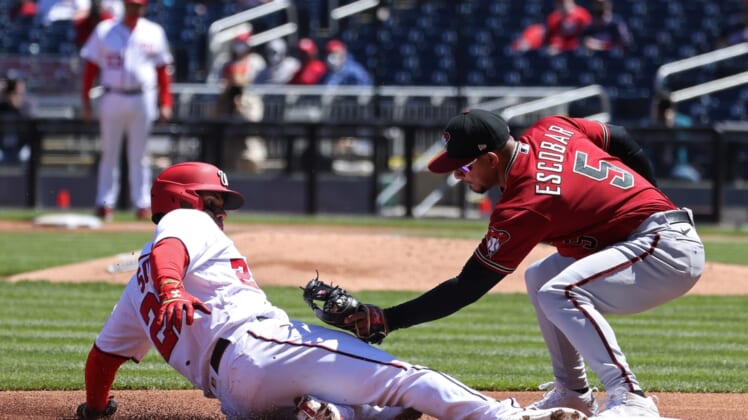 Josh Rojas and Carson Kelly homered and the visiting Arizona Diamondbacks defeated the Washington Nationals 5-2 on Sunday, earning a split of the four-game series.

Diamondbacks starter Madison Bumgarner (1-2) turned in his best outing of the young season, allowing a run on two hits and a walk over five innings. He struck out five.

Four relievers chipped in an inning each with Stefan Crichton pitching the ninth for his first save, getting Andrew Stevenson to fly to right with two outs and two men on.

Washington’s scheduled starter, Stephen Strasburg, was scratched Sunday morning and placed on the 10-day injured list with right shoulder inflammation. The Nationals promoted Paolo Espino (0-1) from their alternate training site to make the start. He took the loss, allowing two runs on five hits in 4 1/3 innings.

Rojas gave Arizona a quick 1-0 lead when he led off the game with his home run.

Turner tied it with two outs in the third with his third homer of the season.

Kelly put Arizona back on top, 2-1, with his third home run of the season in the fourth. He fouled of two 1-2 fastballs before jerking a high fastball out to left.

The Diamondbacks added a run in the seventh. Rojas drew a two-out walk and scored on Pavin Smith’s double down the left-field line.

David Peralta doubled leading off the eighth and later scored on a sacrifice fly by Eduardo Escobar to make it 4-1.

Turner made it 4-2 in the bottom half, but Arizona got the run back in the ninth on a Yan Gomes throwing error.

Arizona center fielder Tim Locastro, who dislocated his left pinky on Saturday, was placed on the 10-day injured list.