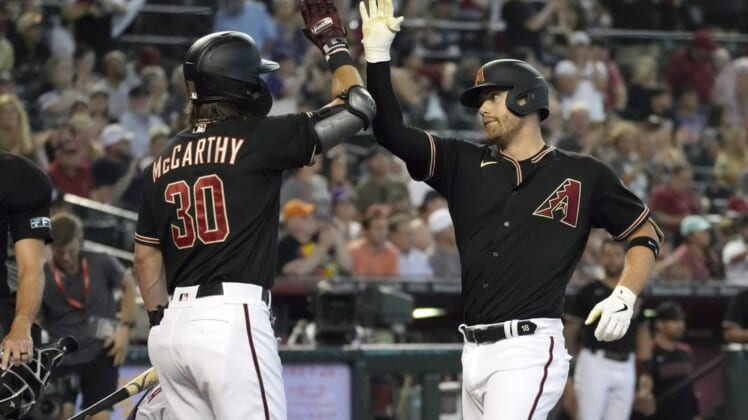 Madison Bumgarner allowed two runs on four hits over a season-high eight innings and Carson Kelly homered to lead the Arizona Diamondbacks to a 7-2 victory over the Washington Nationals on Saturday night in Phoenix.

It was the third win in four starts in July for Bumgarner (6-9), who struck out a season-high nine batters. He didn’t walk anyone but did hit two batters.

Alek Thomas went 3-for-4 with a double and two RBIs, Jake McCarthy had two hits including a double and Geraldo Perdomo added two RBIs for the Diamondbacks, who improved to 2-0 after the All-Star break.

Victor Robles had two hits including a home run and scored twice for Washington. Anibal Sanchez (0-2), making just his second start since Sept. 26, 2020, suffered the loss, allowing three runs on six hits and two walks over five innings. He struck out four.

Arizona took a 1-0 lead in the first on a sacrifice fly by David Peralta, driving in Thomas, who had singled.

Kelly made it 2-0 in the second when he led off with his fifth homer of the season, a 407-foot drive into the bullpen down the left-field line to extend his hitting streak to 12 games.

Washington cut it to 2-1 in the third when Robles led off with a bunt single, stole second, advanced to third on a wild pitch and scored on a groundout by Lane Thomas.

The Diamondbacks extended their lead to 3-1 in fourth when Kelly walked, advanced to third on a double by McCarthy and scored on a groundout by Perdomo.

Arizona then broke the game open with a four-run sixth with all the runs scoring with two outs. McCarthy and Perdomo each had an RBI single, while Thomas lined a two-run double that one-hopped the fence in left.

Robles made it 7-2 in the eighth when he lined his third homer of the season into the left-field bleachers.

Juan Soto went 0-for-4 to have his season-best 27-game on-base streak snapped. Soto, who had a streak of 44 consecutive at-bats without a strikeout, whiffed his final three at-bats.