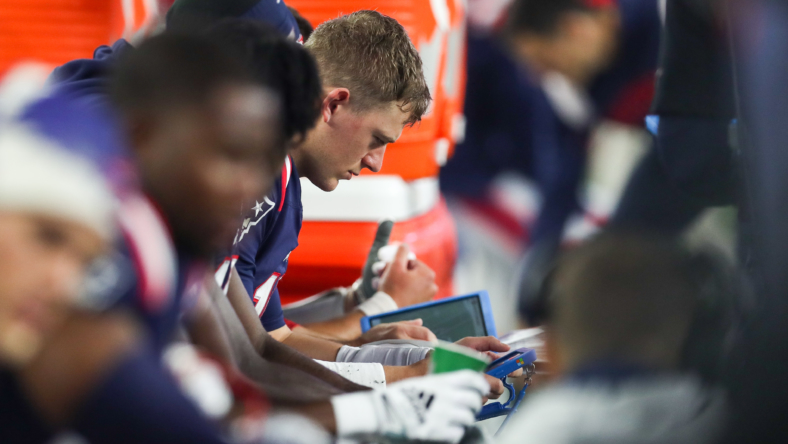 The New England Patriots have a self-inflicted quarterback controversy on their hands following the handling of Mac Jones in Monday night’s blowout loss to the Chicago Bears.

Returning from an ankle injury that cost him three games, Jones got the start in Week 7. He proceeded to complete 3-of-6 passes for 13 yards with an interception.

Immediately after throwing that interception, head coach Bill Belichick pulled Jones in favor of rookie fourth-round pick Bailey Zappe, who led two consecutive touchdown drives before turning the ball over three times in what would end up being an ugly 33-14 loss to the Bears.

Belichick has now made his decision about who will start Sunday against the surprising division-rival New York Jets.

According to ESPN’s Field Yates, Jones will get the start over his younger counterpart. Yates notes that the former first-round pick out of Alabama took 90% of the Patriots’ first team reps in practice on Wednesday and is good to go.

Related: Bill Belichick’s handling of the Mac Jones situation has created a mess

Mac Jones decision was obvious for the New England Patriots

While Zappe was the talk of town after leading New England to two consecutive wins in Jones’ stead, it’s no surprise that Belichick tabbed the latter to be the starter against a surprising 5-2 Jets on Sunday.

New England exhausted a first-round pick on the former Heisman finalist back in 2021. It has attempted to build the offense around him since. Sure Zappe looked good in limited action ahead of Monday’s game. But the Pats simply don’t have a ton committed to him.

As for Jones, he’s been an utter disaster as a sophomore after performing extremely well in leading New England to a playoff appearance last season.

For comparison’s sake, Jones threw 22 touchdowns against 13 interceptions for a 92.5 QB rating as a rookie a season ago. His struggles have stretched back to Patriots training camp with Jones acknowledging he needs to be better.

“I’m going to figure it out. I always have. I always will. At the end of the day, you’re going to have your ups and downs with anything new, but I’ve learned a lot of different systems and the guys around me have too.

We know what football looks like, we know what a good play looks like. It just needs to be more consistent. We all trust in each other at the end of the day. When there’s 10 people that look into my eyes, I know they’re going to trust me to do the right thing on game day.”

As for what we’re seeing in New England right now, some members of the Patriots are not happy about how Jones was treated during Monday’s blowout loss to the Bears.

In particular, wide receiver Jakobi Meyers put both the coaching staff and Pats fans on blast even after he caught a touchdown pass from Zappe.

“It’s tough to see somebody who works so hard get that kind of treatment,” Meyers told reporters from the Patriots’ locker room.

As for Belichick, he was not ready to talk about the Patriots’ QB situation ahead of Wednesday’s report that Mac Jones will get the start. “That’s a hypothetical question,” Belichick said on Tuesday when asked if a healthy Jones would be the starter moving forward. “So let’s see where that is and what that is.”